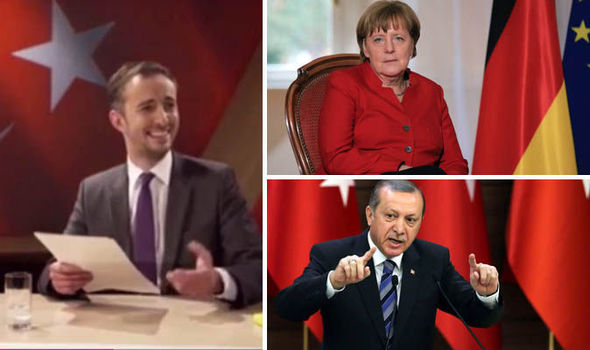 Yesterday, Turkish journalist Arzu Yıldız was sentenced to 20 months in jail and stripped of legal rights over her children for publishing a video (see Appendix below) and an associated story regarding the search of trucks belonging to Turkey’s MIT intelligence agency as they travelled to Syria in 2014 with secret arms supplies for jihadists. Her arrest and conviction is not unexpected in a country where press freedom is long gone and where there have been more than 2000 cases of people charged for insulting President Erdogan. What was not expected, however, was the kow-towing and arse-licking by Germany’s chancellor Merkel when she approved the arrest of a satirical journalist, Jan Böhmermann (pictured above) who had poked fun at Erdogan. This was an act, by Merkel, of sheer desperation, determined, for her political survival, to ensure the deal with Turkey regarding refugees remains on track. But in approving Böhmermann’s arrest, Merkel opened herself up to ridicule. To comment on this extraordinary abuse of press freedom without providing the evidence – the offending poem – would be nonsensical – and it is reproduced below.

Germany has a law explicitly criminalising “defamation” of foreign countries and heads of state. The law, however, requires authorisation from the German government to be enforced. The law states: “Whoever insults a foreign head of state, or, with respect to his position, a member of a foreign government, who is in Germany in official capacity, or a head of a foreign diplomatic mission who is accredited in the federal territory, shall be punished with imprisonment for not more than three years or a fine, in case of a slanderous insult, with imprisonment from three months to five years.”

But this law is contradicted by a higher law. In Article 5 of German Basic Law, essentially Germany’s constitution: “Every person shall have the right freely to express and disseminate his opinions in speech, writing and pictures, and to inform himself without hindrance from generally accessible sources. Freedom of the press and freedom of reporting by means of broadcasts and films shall be guaranteed. There shall be no censorship.”

So Böhmermann is protected. But even if the court finds against him he can then turn to the European Court of Human Rights (ECHR). Under Article 10 of the Convention, “Everyone has the right to freedom of expression. This right shall include freedom to hold opinions and to receive and impart information and ideas without interference by public authority and regardless of frontiers.”

Which begs the question, why did Chancellor Merkel abase herself by approving Böhmermann’s arrest? The answer is too obvious and is all about the refugee deal.

More importantly, there is the matter of the journalists in Turkey – not just Arzu Yildiz, but her colleagues and many others who are being jailed for publishing stories critical of the Government. And the most serious example of this is that of the scandal involving the secret supply of arms to jihadists in Syria by the Turkish Government via its intelligence agency, MIT.

For readers who speak German, here is a link to the episode of Böhmermann’s show, Neo Magazin Royale, broadcast on the public ZDF channel, in which the poem was read (starts after 10 minutes).

Here is the poem in English:

Böhmermann: Welcome to Germany’s comedy show NR. 1. It’s us. We don’t have anything to do with satire. What our colleagues of extra3 did… we’re not as thorough as them. Respect to them, big thing they made. That’s a different league, like heute-show as-well. I really, really like the heute-show. They’re sooo brilliant. When I heard rumors in the past, we were looking for their spot or anything Olli Welke hosts… Noooo, not at all Olli! Best wishes to you! [blows kiss to camera] I am suuuch a big fan of yours, I always watch your show for… for… errr… „inspiration“. Also, the Satire by extra3 almost started the third world war. Big applause for that! Super-song. And apparently in Turkey every, even the smallest satire or comedy show is being watched. So presumably, you also watch our show. Dear Turks, hello, when you watch this here. Maybe we need to explain something to you…? What our colleagues from extra3 did, was to make fun of your politics, Mr. Erdogan. That’s legal in Germany and Europe through freedom of arts, freedom of media and freedom of speech.

Böhmermann: Article 5 of our constitution! That’s legal. Criticism of politicians is legal! You can’t come here and tell the government to withdraw satire or delete it from the internet. This is completely legal here. And I really enjoyed, how civil society stood up this week. Beatrix von Storch, who wanted me shot, if I remember correctly, two weeks ago, because of the “Frühling for Frauke”-video. And now all of a sudden, she’s in first row, when it’s about to defend freedom of arts and speech. Everyone agrees, satire needs to be allowed. Je suis extra3! Mr. Erdogan, but there are of course examples, that aren’t legal. On one side, there’s justified criticism, satire and fun, which is legal. And on the other side there’s „abusive criticism“, which is illegal. „Abusive criticism“, that’s a juridical term.

Böhmermann: To degrade someone is „abusive criticism“? And that’s illegal?

Böhmermann: Did you understand that, Mr. Erdogan?

Kabelka: „It can be prosecuted.“

Böhmermann: It can even be prosecuted? And then video can be withdrawn from the internet?

Kabelka: „Yes, but only afterwards.“

Böhmermann: It may be a bit complicated for you, Mr. Erdogan. Maybe we’ll explain it by a practical example. I’ve got this ‘poem’ here, it’s named „abusive criticism“. May we have a Turkish styled version of a song by Nena? And may we have a Turkish flag in the background? Fine! What comes next would be illegal?

Kabelka: „Would be illegal.“

Kabelka: „One would not be allowed to say that“

Böhmermann: Every Turk can be heard whispering:/ This dumb pig has got shrivel-balls/ From Ankara to Istanbul/ Everyone knows this man is gay/ perverted and zoophil/ Recep Fritzl Priklopil/ His head as empty as his balls/ the star guest on every gang-bang party/ until his tiny wang starts to burn while having a piss/ That’s Reccep Erdogan“ This is what would NOT be legal by freedom of arts! Hey, don’t applaud! What would happen next?

Kabelka: „It would be withdrawn from the mediathek, f.i..“

Böhmermann: So, Erdogan would need to take a lawyer!? I’ll say Dr. Joke is a great lawyer.

Kabelka: „Yes, he’s the lawyer of the mayor of Berlin and others.“

Böhmermann: Mr. Erdogan, visit this lawyer, tell him you’ve watched something you don’t like: „abusive criticism“. Then you’d visit a court. Get a restraining order there. Then we’d have a legal case. Does that become clear to you? I really enjoyed, as a citizen of Germany, now after months of disputes and arguments, we finally had a consensus again. When its’ about despots, when it comes to politicians, who go against freedom, like only despots do: Erdogan, Victor Orban, Beata Shit-lo, Beata Shit-lo from the Piss-Party, the Prime Minister of great neighboring country Poland, Marine LePen from the [acts like vomiting] Front National, Pim Fortuyn in the Netherlands [most likely confused him with Geert Wilders], HC Strache from the FPÖ. They’re all authoritarian, nationalistic wannabe despots. Also Frauke Petry, here, of course. All these are people, who more people should go against. Vladimir Putin, Donald Trump. I really appreciate we resist these guys self-confidently. Who cuts the rights of other people, needs to get his own rights cut.