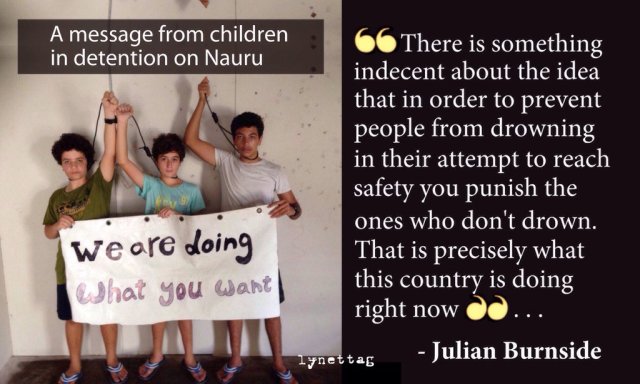 Yesterday, in a landmark ruling, an appeals authority in Lesvos (Greece) disallowed the return of a Syrian refugee to Turkey on the grounds that Turkey is an unsafe country and that Ankara cannot guarantee it will abide by the principle of non-refoulement. This ruling is highly significant – not only because it places the entire EU-Turkey refugee deal in jeopardy, but because it sends a message to countries around the world that non-refoulement is a universal principle that must be respected and, furthermore, that to send or return refugees to unsafe territory is not only immoral but flouts all international conventions, including the Geneva Convention. Australia is a signatory to that Convention and in contravening it, as it has in regard to its controversial offshore processing program, the Government there is liable to prosecution. Moreover, there is ample evidence that Nauru is, like Turkey, an unsafe country to send refugees to, even on a temporary basis. Refugees detained there have been attacked, subject to rape and conditions generaly have seen multiple cases of self-harm as well suicides. To end the current impasse regarding the offshore processing of refugees, at least in Nauru, Australian lawyers should seek a court ruling, similar to that given by the Greek authorities.

Such a ruling is long, long overdue. And the longer it is put off, the more likely there will be further tragic cases of self-harm and, possibly, deaths on Nauru (and on the other refugee detention centres paid for or managed on behalf of the Australian Government).

But Immigration Minister, Peter Dutton, appears illiterate of Australia’s legal obligations – if not morally paralysed – and he is clearly unable to know what to do next. This illiteracy and paralysis is indicative of the Government as a whole. The moral high-ground has always been with the people of Australia, whose instincts, in contrast, for doing what is right have never let them down.

It is imperative that the legal community in Australia collaborate to bring an end to this impasse, this paralysis. The men, women and children detained on Nauru have been protesting there now for two months, awaiting help.

Meanwhile, the Australian Government appears equally paralysed regarding what it should do in the wake of the court ruling in Papua New Guinea that the detention of refugees on Manus Island is illegal and that all those detained should be released. Not only has the Australian Government failed to take action as required by this ruling, but for every day of inaction the amount of money that could be paid in compensation to the refugees will mount up.

In short, while Australia may not be described officially as a dysfunctioning ‘failed state’, its governance can and it’s political leades may well one day see themselves in court on serious charges relating to organised kidnapping, hijacking and arbitrary detention – all contrary to notions of natural justice and amounting to nothing less than crimes against humanity.

The Australian Government has obligations regarding several international treaties to ensure human rights are respected and protected. These treaties include:

These rights include the right not to be arbitrarily detained. As a party to the Refugee Convention and the International Covenant on Civil and Political Rights (ICCPR) articles 6 & 7, Australia agreed to ensure that asylum seekers who meet the definition of a refugee are not sent back to a country where their life or freedom would be threatened. This is known as the principle of non-refoulement. Australia also has obligations not to return people who face a real risk of violation of certain human rights under the ICCPR, the CAT and the CRC, and not to send people to third countries where they would face a real risk of violation of their human rights under these instruments. These obligations also apply to people who have not been found to be refugees.

This entry was posted in Refugees and tagged Australia, Greece, Manus, Nauru. Bookmark the permalink.

1 Response to Turkey ruled unsafe by court – so could Nauru: refugees await intervention from Oz lawyers