Jeremy Corbyn in his younger days

Yesterday Jeremy Corbyn MP, a serial protester and radical campaigner, was elected in a landslide poll as leader of Britain’s Labour Party. On the same day Michael Fallon, the Defence Secretary, responded by declaring him a national security risk. At first this seemed more like a joke – there again, Corbyn’s socialist agenda terrifies the establishment. Presumably MI5 will now step up their surveillance of Corbyn and provide whatever scandal they can find on him to the Murdoch press as part of a wider destabilisation ‘coup’ that would also involve the collaboration of the Labour Party right. Moreover, by sanctioning Fallon’s declaration the Government also signalled an escalation of its assault on anti-establishment and anti-capitalist protesters generally, which it perceives as Corbyn’s true ‘constituency’. Let’s explore aspects of this further…

Yesterday, Conservative Party HQ emailed party activists with the following flyer. This flyer represents a clear message to Mr Corbyn and the Labour Party: that the Conservative Government will do whatever it can from Day One – dirty tricks – you name it – to crush Corbyn and his supporters. 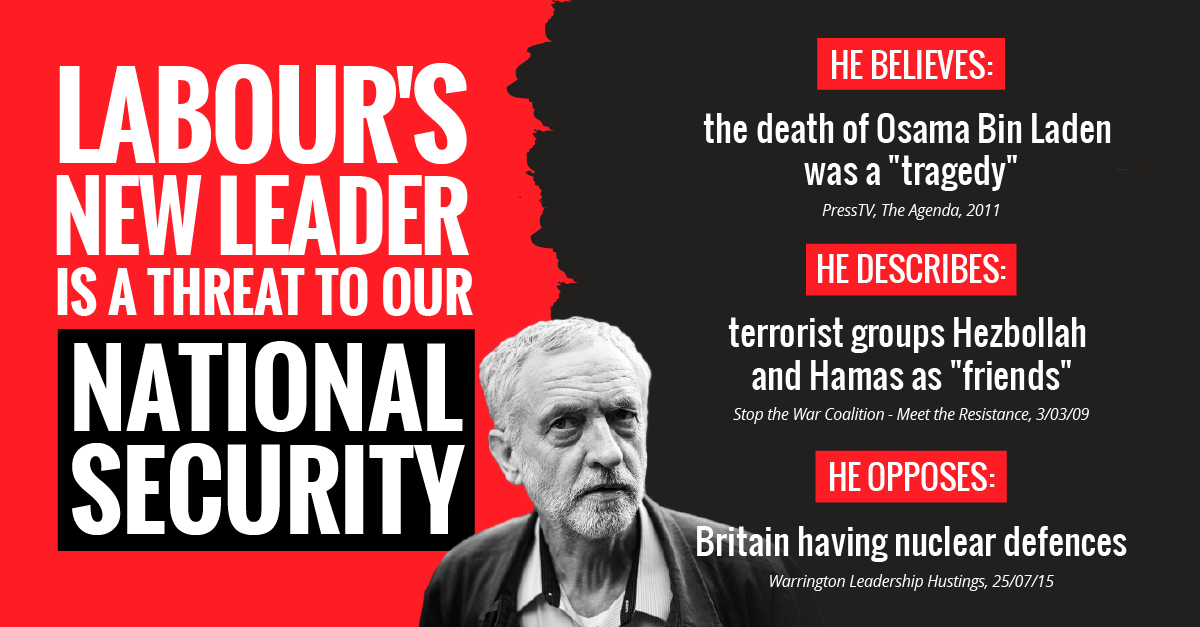 The Labour Party is now a threat to our national security, our economic security and your family’s security.

Earlier today, senior Tory Michael Gove described Corbyn’s loyalties as not pro-NATO (i.e. code for UK) but pro-Hamas and pro other terrorist organisations – the implication being that in his view Corbyn is a traitor.

Mr Corbyn had already made enemies of the security & intelligence services in that he has previously stated his support for  Chelsea Manning (and, presumably, the work of Wikileaks) and has voted against mass surveillance by GCHQ. In other statements he has made it clear he is against privatisation, wars in general and wants more help for refugees. On the economy he is against austerity measures and zero-hour contracts. He is also against the erosion of trade union rights and blacklisting. And so on…

While Mr Corbyn will no doubt fight the attacks on his person by the Establishment and media every inch of the way, it’s important that the wider anti-Tory movement should be cognisant of the intelligence structures already in place to protect the Establishment.

According to the Campaign Opposing Police Surveillance, the “whistleblower Special Demonstration Squad officer, Peter Francis, named ten MPs who he saw files on, including three that he personally spied on. The list included: Tony Benn, Ken Livingstone, Dennis Skinner, Joan Ruddock, Peter Hain, Diane Abbott, Bernie Grant and Labour’s current deputy leader Harriet Harman. The two other targets have particular resonance. One is Jack Straw who, as Home Secretary, was ultimately in charge of the police…”

“The other is Jeremy Corbyn who was spied on by Francis in the 1990s. Francis was deployed at the time by his manager at the Special Demonstration Squad, Bob Lambert” (who, incidentally, is now, along with other spycops, the subject of investigation as part of the Pitchford Inquiry into undercover policing). 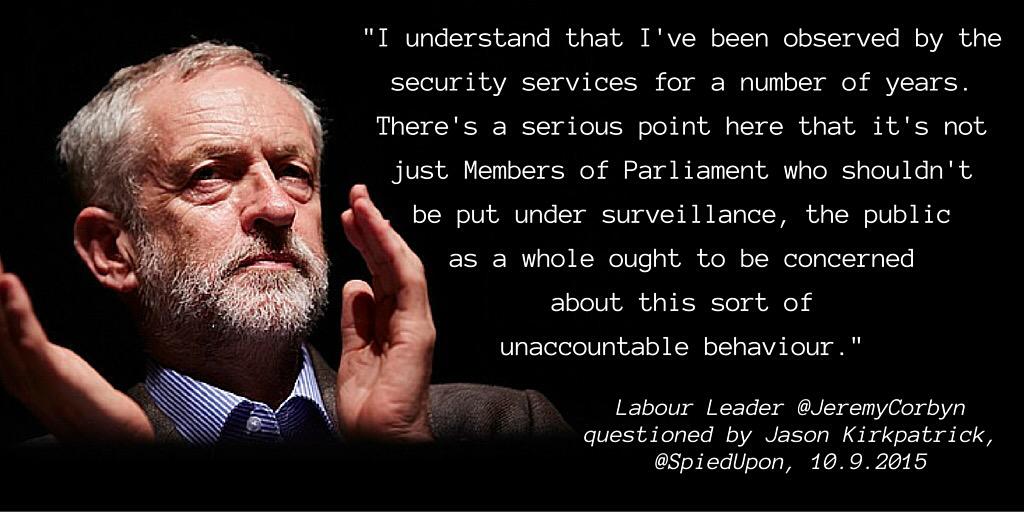 The police try to characterise these people as ‘extremists’. But how do the police define ‘extremism’…?

“Who is considered a domestic extremist? Single issue protest campaigns are regularly facilitated by police and local authorities who each have a duty to uphold the rights of individuals and groups to protest in public. However, in recent years, a small number of groups and individuals have pursued a determined course of criminal activity designed to disrupt the public peace and lawful business, and at worst, repeatedly victimise selected individuals. This activity has ranged from blackmail and serious intimidation in the name of animal rights; bombing campaigns by violent and racist individuals associated with far right wing groups; violent disorder from left wing or anarchist individuals, to large scale criminal damage against scientific GM crops studies and mass aggravated trespass or unlawful obstruction of lawful businesses associated with the national infrastructure of our country, such as power stations and airports by those who’s stated aim is to stop any business perceived to harm the environment.”

In 2014 the Metropolitan Police provided a much leaner definition: “Domestic Extremism relates to the activity of groups or individuals who commit or plan serious criminal activity motivated by a political or ideological viewpoint.”

Clearly Mr. Corbyn would not be seen as an extremist under either of these definitions; nor the vast majority of protesters with whom Mr Corbyn would no doubt support.

But that hasn’t stopped specialist undercover police units from monitoring such individuals over many years for ‘intelligence purposes’; nor are they likely to discontinue this monitoring.

Indeed, according to the Bristling Badger blog, at a meeting involving over 100 teachers in West Yorkshire a local ‘Prevent’ officer cited environmental groups and named Caroline Lucas MP as an example of extremism. Lucas was arrested in August 2013 at the Balcombe fracking site… It was a peaceful and stationary demonstration. Lucas was subsequently charged with minor offences but later acquitted.

In a more recent case police told teachers that they should consider envir­onmental activists and anti-fracking protesters as potential extremists under the government’s Prevent counter-terrorism strategy. The were also warned about ‘anti-capitalist extremists’.

Also, in July, police in London included activists from the city’s Occupy protests with al-Qaida and the IRA in a presentation given to prepare nursery and primary school staff for potential terrorist attacks on the UK. A copy of a City of London Police document on community engagement that listed a number of initiatives, including Project Fawn (part of the Prevent programme) was reported on in an article by Undercoverinfo.

In other words, there is a deliberate conflation of legitimate protest (environmental, anti-war, industrial, etc) with terrorism, via not just the terminology and language used by Government policing and intelligence agencies, but by the type of policing agencies deployed.

And should you need proof that monitoring by specialist police units of ‘extremists’ is strategically if not operationally linked to the ongoing work of the UK intelligence agencies, you need only examine the career of the man who has overall management of the Prevent programme (see Appendices below for archived copies of Prevent programme documents).

Charles Blandford Farr has, since 2007, been the Director of the Office for Security and Counter-Terrorism, which oversees ‘Prevent’ and other counter-terrorism operations. Farr was previously responsible for the Interception Modernisation Programme under Labour, as well as the Communications Capabilities Development Programme – both projects argued for mass surveillance of the UK population and contributed to the draft Communications Data Bill (known colloquially as the ‘Snooper’s Charter’). At the Conservative conference in September 2014, Theresa May MP announced that a future Conservative government would reintroduce the legislation and an Investigatory Powers Bill was subsequently announced in the Queen’s Speech in May 2015. (See also Farr’s robust defence of mass surveillance measures via his extensive witness statement to the Investigatory Powers Tribunal.) Farr, incidentally, was also Director of Security and Public affairs at MI6 and at one point tipped to be head of GCHQ. In short, Farr can be seen as the lynch-pin that links extremist policing expertise and traditional intelligence-gathering.

While Prevent monitoring and other intelligence-gathering will continue to be used against protesters generally, surveillance of the Leader of the Opposition, however, is more likely to be via a Met Police unit or a discreet section of MI5, with the Government using the excuse that Mr Corbyn needs protection (whether he wants it or not).

And while the knives are out for the Opposition leader to ensure he stands nil chance of ever becoming Prime Minister, no one can predict just how the millions of disenchanted, disillusion and disenfranchised voters (and serial non-voters) will react in the coming months and years to attempts at retaining the status quo.

And, perhaps, it is this unpredictablity that may prove to be Mr Corbyn’s greatest asset.

(The following two documents are not particularly relevant to this article but are included for the benefit of those viewers who are addicted to archival documents.)

This entry was posted in Government, no category and tagged extremism, Jeremy Corbyn, PREVENT, Snoopers Charter. Bookmark the permalink.