The period of unrest in France during May 1968 saw massive demonstrations and two weeks of general strikes across all regions of the country, universities were occupiesd and workers did the same in the factories. The entire economy of France was brought to a dramatic halt. The political elite feared civil war – or even revolution – and President Charles de Gaulle secretly fled France for Germany, but the army persuaded him to return. Over the days and weeks of this ‘revolution’ – inspired, some say, by the ideas of the Situationist International – assemblies took over the centre of cities, music pervaded the streets and there was dancing. Thus was born the spirit of ’68 that, some say, has now returned at a time when people are seeking answers of a post-capitalist nature… 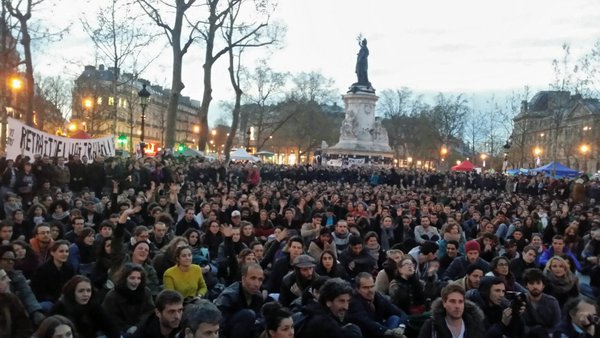 The Nuit Debout movement in France has seen similar occupations in every major city in France. The movement takes on no single form, even behind the ritual of the general assemblies in Paris and now other cities.  It is plural, chaotic, fed by the multiple protests against the country’s new proposed labour law and a diversity of organisations and collectives coming from other social movements.  Yet it is precisely in this absence of order that the square occupations become spaces of convergence and of proliferation (rather than of enforced collective decision making), susceptible of generating lines of resistance/creation beyond State-Capital. The events multiply and the voices speaking also become many.

The spirit of resistance has captured the imagination of a new generation in France, as youth-led opposition to neoliberal labour “reforms” has spiralled into full-on rejection of the whole capitalist system on the street and squares.

The situation took on a new dimension after the general strike and day of action on Thursday March 31. There was a call for people not to go home afterwards but to stay on the streets, beginning a wave of overnight “Nuit Debout” occupations that has spread from Paris across France and into the Iberian peninsular, Belgium and Germany.

The March 31 “moment” has also been symbolically extended by the renaming of the following days of the mobilisation as March 32, March 33 and so on.

On Tuesday March 36 (April 5 in the old pre-revolutionary calendar) there was another massive turn-out on the streets all over France, with increased police violence and defiant resistance.

In Paris police fired tear gas and charged the crowds of youngsters who countered with stones, glass bottles and eggs, chanting “police everywhere, justice nowhere!” and “everybody hates the police!”

Police arrested a staggering 130 schoolchildren and students on the day, leading to an evening protest outside a police station involving hundreds of people and more clashes.

It was a similar story in the Mediterranean city of Marseilles. A report on the Mars-info site said that if the initial demonstrations against the Loi Travail (labour law) had felt like the first breath of Spring, the events of March 36/April 5 showed that it had well and truly arrived.

Police charges were resisted, a motorway blocked, traffic thrown into chaos, the offices of the ruling Socialist Party redecorated. And the promise of so much more to come…

In Brittany, the main railway line was blocked in Rennes city centre, while banks, chain stores and the Socialist Party offices were targeted in Nantes.

Another hotspot was in Toulouse, where a wildcat protest and invasion of the city’s railway station was followed by an overnight Nuit Debout occupation of between 500 and 1,000 people.

When an authentic wave of revolt surges up from the collective heart of a population, there is little that can stand in its way. Like the waters of a mighty flood, it either sweeps away everything in its path or finds a different course that takes it past all obstacles. This is what we are seeing in France at the moment, where a rejection of the capitalist system has emerged from deep within society, most notably amongst the newest generation… this phenomenon has been growing for some time now and has taken many forms. The French state, frightened of a serious threat to its power, probably imagined it had found the solution in the wake of the November 13 terror attacks in Paris.

The draconian “state of emergency” has been combined with increased police brutality and the usual “anti-terrorist” media paranoia to try to create a climate in which revolt can have no place.

It worked to some extent with the COP21 protests in Paris, where the anticipated atmosphere of rebellion was significantly dampened. But when the state started making noises about evicting the ZAD protest camp to make way for a new Nantes airport, the huge response of solidarity and defiance showed that the underlying rebel spirit remained intact.

And with the planned El Khomri labour laws, the “socialist” French government  certainly overestimated its own power over the people. While obedient trade unions failed to make much of a fuss about this serious attack on workers’ rights, others were outraged and the very youthful grassroots campaign emerged out of nowhere to oppose it.

The state has tried to crush it by the use of ugly police violence and general levels of repression which have been made possible by the “state of emergency”. But even this has not worked. Indeed, the flood waters of revolt have merely swept up the tools of the state’s repression and used them as battering rams against its legitimacy.

As one statement from protesters explained: “What is being born here has little to do with the labour law. This law is just the tipping point. The one attack too many. Too arrogant, too blatant, too humiliating. The surveillance laws, the Macron law, the state of emergency, the stripping of nationality measures, the anti-terrorist laws, the penal reform project and the labour law all add up to a system. It’s one big project to bring the population to heel. Everyone knows that what makes a government retreat is not the number of people on the streets,  but their determination. The only thing that will make a government retreat is the spectre of an uprising, the possibility of the loss of total control”.

Uncontrollability has proved a key element of the current revolt, with stewards from trade unions like the CGT being very obviously used by the authorities to try to hold back the energy of the youthful revolutionaries during protests.

One eye-witness to the March 31 protests in Marseilles described how the CGT stewards stood between the young protesters and the police with their backs to the cops, “showing clearly whose side they were on”. As the protesters chanted “All Marseilles hates the police!”, the stewards were mocked and insulted, being called “collaborators” by the young crowd whose hatred for the system also embraces the false rebels of the comfortably conformist Left.

One recent article sees the strength of the wave of revolt as lying in the fact that it is not a “movement” that lends itself to being easily manipulated and recuperated by the status quo.

The behaviour of the union stewards and cops is a tell-tale sign that they are desperately trying to gain some kind of control over a phenomenon which is completely beyond their grasp. The response of the French state to recent rising levels of dissent has been predictable. It has emerged that at the end of last year it placed a 5 million euro order for hundreds of thousands of rubber bullets and seems determined to try and crush opposition by force.

But resistance is spreading. A new generation is at war with the system. The tyrants are running scared.

This entry was posted in Resistance and tagged anarchism, France, Situationism. Bookmark the permalink.