Mexico: Zapatista update on the 43 students (tortured and assumed murdered) 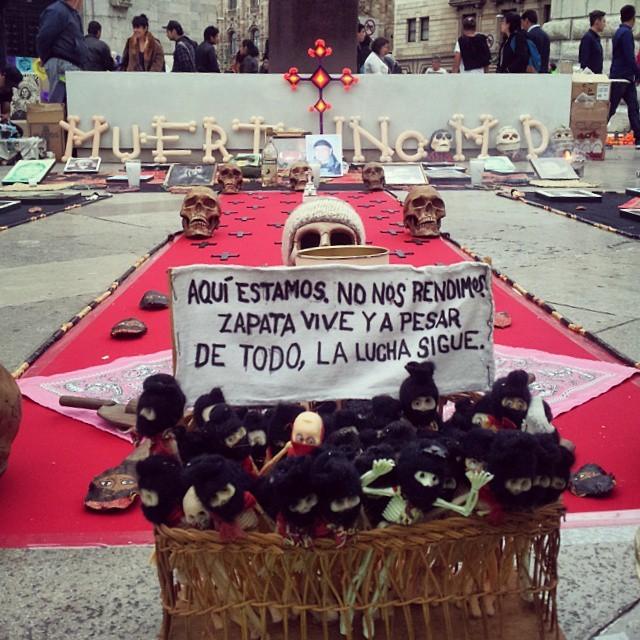 Last month 43 students from the Ayotzinapa School in rural Mexico were abducted by police and are feared murder. Nine mass graves with 28 bodies have been found. Below (thanks to Zapatista solidarity organisations) is an edited report on the background to the abductions/murders. The Zapatistas are demanding all those responsible be dealt with.

The Ayotzinapa School in Guerrero state is a school for elementary rural teachers. The students are mostly indigenous people and peasants. The school is located in the heart of the mountains (the Sierra), in a poor rural area. In the 1960s and the 1970s Genaro Vázquez and Lucio Cabañas, two teachers at the school,  organized non-violent civil rights. The governors of Guerrero state have been linked to anti-guerrilla death squads, the Government counter-insurgency “dirty war” and organized crime.

The students were preparing a rally for October 2, the anniversary of another student massacre (1968). With the permission of the bus drivers they “borrowed” two buses which they were going to bring back later. The local Mayor got angry when he learned that the students were going to protest at his wife’s official ceremony and so ordered the Chief of Police to “take care of them”. The police shot some of the students (according to the testimony of two students who survived) and arrested the rest, then handed them over to the drug-smuggler gangs. One of the students was flayed alive. There are unconfirmed testimonies that the rest of the students were tortured and their bodies burned.

The search for their bodies has also uncovered the existence of many mass graves. Iguala City, where the massacre occurred, is a bridge city for drug smugglers, the main cartel being named “Guerreros Unidos” (“United Warriors”). All kinds of drugs are sent from there mainly to Acapulco Harbour, but also to other harbours. It is also an area of poppy cultivation.

This entry was posted in Resistance and tagged Mexico, Zapatistas. Bookmark the permalink.

2 Responses to Mexico: Zapatista update on the 43 students (tortured and assumed murdered)