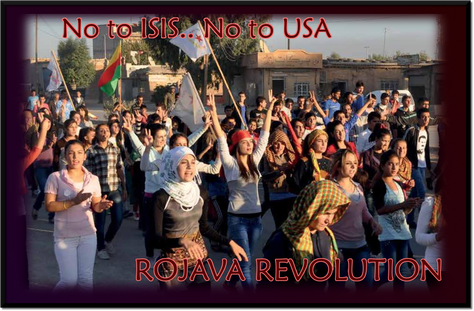 A new international brigade – the International Revolutionary People’s Guerrilla Forces (IRPGF) – has been launched to defend the revolution in Rojava (Kurdistan). Its wider aim is to help “defend social revolutions around the world, to directly confront capital and the state, and advance the cause of anarchism”. A brief statement by the IRPGF is given below, followed by a full statement.

(Note: The original International Brigade was a defence organisation of anarchist and socialist volunteers from around the world, who travelled to Spain in 1936-39 to fight the fascists (Francosists). Famously included George Orwell.)

Today, the revolution is under attack. Like the Paris Commune and at so many other points in history, the revolutionary forces face the leviathan of capitalist hegemony which has come to devour the new world and enslave us all once again. This is our Stalingrad. The revolution must be defended! Therefore we announce the creation of the International Revolutionary People’s Guerrilla Forces (IRPGF) to defend the revolution in Rojava.

The International Revolutionary People’s Guerrilla Forces (IRPGF) is a militant armed self-organized and horizontal collective working to defend social revolutions around the world, to directly confront capital and the state, and advance the cause of anarchism.

VICTORY TO THE REVOLUTION IN ROJAVA!

VICTORY TO THE BARRICADES, THE SOCIAL INSURRECTION AND THE COMMUNUE!

FOR THE REVOLUTION AND ANARCHISM!

(A video by the IRPGF can be found here.)

Communique from the IRPGF

Today we announce the formation of the International Revolutionary People’s Guerrilla Forces, an explicitly anarchist, militant group in Rojava seeking to defend the Revolution and advance the cause of anarchism.

The Role of the IRPGF

The International Revolutionary People’s Guerrilla Forces (IRPGF) is a militant armed self-organized and horizontal collective working to defend social revolutions around the world, to directly confront capital and the state, and advance the cause of anarchism. We recognize and affirm that principled action necessitates principled politics. We are not a political party or platform but rather an armed collective comprised of comrades with different anarchist positions. The IRPGF’s collective unity manifests itself in the praxis of militant action which we consider a prerequisite for achieving liberation. Our role is twofold; to be an armed force capable of defending liberatory social revolutions around the world while simultaneously being a force capable of insurrection and struggle against all kyriarchal forms of power wherever they exist.

We do not enter conflict zones with intent to command but rather, while retaining our autonomy as a collective, to fight alongside other armed groups in solidarity with those who are oppressed, exploited and facing annihilation. The IRPGF believes collective action, solidarity and unity are necessary for struggle. International solidarity is the most powerful weapon of the oppressed. At the same time we maintain the need for criticism when and where appropriate. (Self) Criticism is not something to be feared. It is to be embraced as the constant source of energy that drives individuals, communities and revolutionary movements towards realizing liberation.

The Need for Armed Struggle

Within movements for liberation an enormous chasm exists between those who deploy peaceful means to confront the enemy and those who defend both their communities and themselves through armed struggle. These dichotomous positions contain within them an inter-sectional network of social positions and identities that reveal their location, context and content. For the IRPGF, peaceful methods are unable to confront and destroy the state, capitalism and all forms of kyriarchal power. In fact, they do the reverse. They protect, embolden and strengthen the enemy, enhancing the forms of oppression against increasingly isolated individuals and divided societies. We believe that our liberation springs forth from the barrel of a gun.

Armed insurrections and rebellions around the world will be carried out to the end. We fight in defense of life and we struggle for total liberation. The nation-state, authority, capital and social hierarchy are the enemies of a liberated world and therefore enemies of us all. While we struggle through self-criticism and collective criticism of our personal and collective internalisations of these oppressive behaviors, attitudes and practices, the external enemies; the bosses, along with their armies and police, must be confronted with bullets, bombs and dynamite. The fires of justice and freedom are cleansing and all consuming. For us, there is no stepping back and no way to achieve liberation except through struggle. Our communities will only be liberated when we destroy those few whose wealth and power depend on the suffering and exploitation of many.

The master does not give the slave freedom simply out of an ethical act of pity, selflessness and love. The slave must achieve their liberation through insurrection, resistance and revolution, using every tool of the master to destroy both the master and their mechanisms and apparatuses of domination and oppression. The yoke of tyranny and its chains of repression cannot withstand the insurrection of the oppressed. We long for the day when swords will be turned into plough shares, but until that day arrives, if it ever does, we will hold on to our weapons. The IRPGF’s existence is predicated on the necessity of armed struggle. The moment this is no longer necessary, the IRPGF will cease to exist. Our position is against the notion of “standing armies” or ossified revolutionary groups that become insular states unto themselves.

We believe that the third world war has already started and that the conflicts in Syria, Ukraine and in other parts of the world are only the beginning. The capitalist system, nearing its end and having plundered the world and stripped it of its resources, faces its most acute crisis yet. With no surplus labor population to put in its dungeons and assembly lines, the antagonisms and contradictions of the system in crisis are unfolding. With imperialist powers fighting for the last scraps to safeguard their livelihoods and with fascism on the rise, a common struggle is developing against both the domination of capital and the state. The IRPGF will stand with all peoples looking to secure their futures free from ALL forms of oppression, domination and exploitation. We are cognizant and recognize the intersection of unique identities and the particularities that exist within individuals, in communities and between individuals and communities. We support and seek to fully realize the polymorphic nature of human identity and struggle. To this end we join with peoples around the world in their uniqueness, and in ours, to realize our collective liberation.

FOR THE REVOLUTION AND ANARCHISM!