A month back families of 200 people murdered in the Troubles accused David Cameron’s government of censoring files that could explain more the circumstances of their deaths (see copy of advertisement, below, published in The Guardian). The British Government has so far refused to release, unredacted, these files on grounds of ‘national security’. But peace in Northern Ireland can never be realised as long as Government cover-ups continue or vital evidence concealed. It has long been known that one British military intelligence section, the Force Research Unit, colluded with the Protestant paramilitaries and infiltrated Republican paramilitaries: its mission, to disseminate disinformation, direct paramilitary operations and – ultimately – eliminate Republican activists as part of a ‘strategy of tension’. A ‘Restricted’ document that provides the unexpurgated testimony of a FRU operative is published below and, when examined in relation to other key documents, provides further evidence of what some have referred to as Britain’s own ‘Killing Fields’.

Note: this article forms part of a summary article in The Canary. 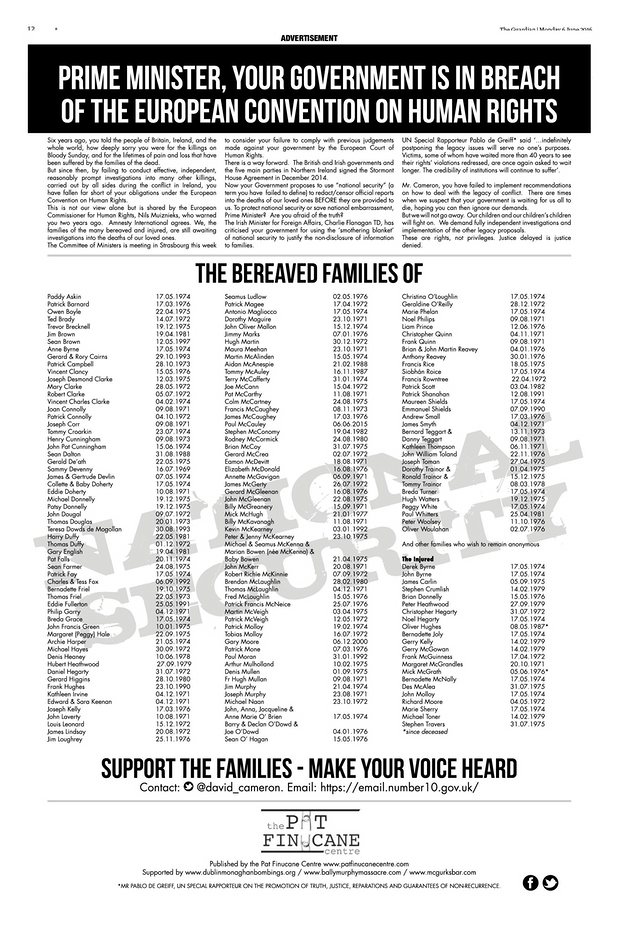 Here is the statement marked ‘Restricted’ by Martin Ingram (real name Ian Hurst). This is complemented by another statement by Hurst to the Smithwick Tribunal of Inquiry (Dublin). Also referenced below is the 2012 Pat Finucane Review.

“That 98.5% of those arrested were on the British secret state payroll is the most surprising thing I have read for a very long time. These were on the Loyalist side of the conflict – allies. Essentially, of the British state – and I think we may assume that on the Republican side a lower percentage of the combatants had been recruited by the British sate.” (Source: Spy versus Spy – section re Smithwick Tribunal.)

1. The allegation – according to Hurst – that Sinn Fein leader Martin McGuinness fired the first shot at Bloody Sunday was false.
2. The Force Research Unit (FRU) allegedly had a file on suspected rogue gardai who were prepared to pass information to the IRA and act as FRU agents. MI5 also allegedly had a network of agents within the Garda.
3.  One in four IRA members was allegedly a British agent.
4. At the centre of this web of intrigue sat the IRA’s head of internal security, the agent known as ‘Stakeknife’, who allegedly took information from rogue gardai while he worked for British intelligence. ‘Stakeknife’ has widely been identified as Freddie Scappaticci, a veteran Belfast republican. It should be emphasised, however, that Scappaticci has strongly denied working for British intelligence and claims he cut his links with the IRA in 1990.

B. The Hurst/Ingram ‘restricted’ testimony unpicked

Bloody Sunday took place on 30 January 1972 in the Bogside area of Derry, Northern Ireland. British soldiers shot 26 unarmed civilians during a protest march against internment. Fourteen people died: thirteen were killed outright, while the death of another man four months later was attributed to his injuries. Many of the victims were shot while fleeing from the soldiers and some were shot while trying to help the wounded. Other protesters were injured by rubber bullets or batons, and two were run down by army vehicles.

Two investigations have been held by the British government. The Widgery Tribunal, held in the immediate aftermath of the incident, largely cleared the soldiers and British authorities of blame. Many considered it to be a whitewash. The Saville Inquiry was established in 1998 to re-investigate the incident. 12 years later the Saville report was made public and concluded that the killings were both “unjustified” and “unjustifiable”. But not all testimony was published.

Saville found that all of those shot were unarmed, that none were posing a serious threat, that no bombs were thrown, and that soldiers “knowingly put forward false accounts” to justify their firing. David Cameron then made a formal apology on behalf of the United Kingdom to the victims.

At the subsequent Bloody Sunday Inquiry, Ian Hurst (aka Martin Ingram) was served with an injunction, preventing him from revealing sensitive intelligence, to which he had been asked to give evidence. However, this injunction was varied to allow him to speak in closed session.

It is this closed session evidence, marked ‘Restricted’, that is revealed and referred to (in summary) here:

C. Role of the FRU in the ‘Killing Fields’

Hurst/Ingram was an agent of the FRU, which was a para-judicial death squad, its modus operandi little different from that employed by paramilitaries. Many FRU members not only infiltrated the IRA, the PIRA and the UDA (its overall objective was to neutralize as many paramilitary members as possible) but were complicit in the actions of these paramilitary forces.

The FRU was headed by Colonel Gordon Kerr, a counter-insurgency expert from the SAS. According to a FRU source (Hurst?) who was interviewed by Neil Mackay of The Sunday Herald, “There was an unbroken chain of command running from the handlers, to Kerr, then through to the military top brass in Ulster, on to the Ministry of Defence Chiefs of Staff, the Secretary of State for Northern Ireland and finally the Prime Minister. At the time of Finucane’s death George Younger was Secretary of State for Defence, Tom King was Ulster Secretary, Thatcher was Prime Minister and General Sir John Waters was the general officer commanding in Northern Ireland”. The source added: “‘I can say with dead certainty that the FRU did conspire to murder certain individuals with loyalist terrorists through our work withUDA informers. And Kerr knew about it”.

Altogether, it has been estimated that 15 innocent civilians died as a direct result of FRU/UDA collusion with paramilitary forces. During the conflict, loyalist paramilitaries killed 864 civilians, the vast majority of them were Catholics.

The following points relating to FRU operations are extracted from the Pat Finucane Rreview:

Further details re FRU activities can be found in the Smithwick Tribunal Inquiry:

Explanatory intro… The Smithwick Tribunal was set up to investigate the murder of RUC Chief Superintendent Harry Breen and Superintendent Robert Buchanan on 20 March 1989. The suspected killer was a member of the RUC (Royal Ulster Constabulary) who was working with the Gardai (Republic of Ireland police). Chief Superintendent Harry Breen and Supt Robert Buchanan were shot dead while returning from a meeting at Dundalk Garda station in the Republic. The Smithwick Tribunal heard evidence from a number of witnesses, some of whom alleged that members of the Garda passed information to the IRA. One of the alleged rogue officers in Dundalk had already been identified: Owen Corrigan, a detective sergeant, was named by Jeffrey Donaldson under Parliamentary privilege. Mr Corrigan, now retired, has always denied the allegations and appeared at the Smithwick Tribunal to reject them.

But the Tribunal uncovered a whole lot more…

The ‘Restricted’ document, examined in relation to other published sources, provides a glimpse into the working of the Force Research Unit. But the families of those killed directly by the FRU or via its intervention will require far more information on the role of the FRU if there is to be any justice at all.