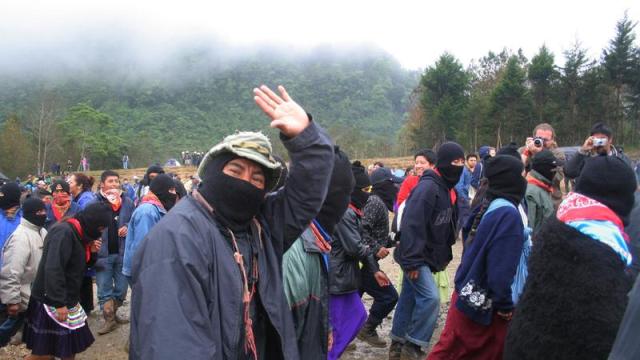 At least eight people were killed in clashes in southern Mexico over last weekend when police and members of a teachers’ union faced off in violent confrontations. Violence erupted on Sunday when police dislodged protesters blocking a highway in the southern state of Oaxaca. The teachers from the radical National Coordinator of Education Workers, or CNTE, are opposed to the mandatory testing of teachers as part of Mexico’s education reform and are also protesting the arrest of union leaders on money laundering and other charges. The eight dead are Oscar Aguilar Ramírez, 25, Andrés Sanabria García, 23, Anselmo Cruz Aquino, 33, Yalit Jiménez Santiago, 28, Oscar Nicolás Santiago, Omar González Santiago, 22, Antonio Perez García, and Jesús Cadena Sánchez, 19. At least 45 others have been hospitalized with injuries, the majority gunshot wounds, and 22 have been disappeared.

Communique from the Zapatistas

To the peoples of the World:

Faced with the cowardly repressive attack suffered by the teachers and the community in Nochixtlán, Oaxaca—in which the Mexican state reminds us that this is a war on all—the peoples, nations, and tribes who make up the National Indigenous Congress and the Zapatista Army for National Liberation say to the dignified teachers that they are not alone, that we know that reason and truth are on their side, that the collective dignity from which they speak their resistance is unbreakable, and that this the principal weapon of those of us below.

We condemn the escalation of repression with which the neoliberal capitalist reform, supposedly about “education,” is being imposed across the entire country and principally in the states of Oaxaca, Chiapas, Guerrero, and Michoacán. With threats, persecutions, beatings, unjust imprisonments and now murders they try to break the dignity of the teachers in rebellion.

We call on our peoples and on civil society in general to be with the teachers who resist at all times, to recognize ourselves in them. The violence used to dispossess them of their basic work benefits with the goal of privatizing education is a reflection of the violence with which the originary peoples and rural and urban peoples are dispossessed.

Those who delight in power decided that education, health, indigenous and campesino territories, and even peace and security are a commodity for whoever can pay for them, that rights are not rights but rather products and services to be snatched away, and they dispossess, destroy, and negotiate according to what big capital dictates. And they intend to impose this aberration through bloody means, murdering and disappearing our compañeros, sending our spokespeople to high security prisons, making shameless torture into government marketing, and with the help of the paid press, criminalizing the bravest part of Mexican society, that is, those who struggle, who do not give in, who do not sell out, and who do not give up.

We demand a halt to the repression against the teachers in struggle and the immediate and unconditional liberation of ALL political prisoners.

We invite all of the peoples of the countryside and cities to be attentive and in solidarity with the teachers’ struggle, to organize autonomously in order to remain informed and alert in the face of the storm that is upon all of us, knowing that a storm, in addition to its turmoil and chaos, also makes the ground fertile where a new world is always born.

From the mountains, countryside, valleys, canyons, and barrios of the originary peoples, nations, and tribes of Mexico.

Never Again a Mexico Without Us!

Zapatistas (Mexico) urge social revolution:; Where others destroy, we rebuild

This entry was posted in Economy, Resistance and tagged Mexico, Zapatistas. Bookmark the permalink.