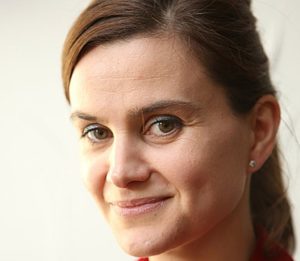 Jo Cox MP was a humanitarian and a tireless campaigner for refugees and, in particular, the war refugees of Syria. She was more than a politician: she was passionate about her work and had been involved in many charities/NGOs that were spearheading humanitarian causes. Her alleged murderer, Thomas Mair, was a vunerable individual who had a documented history of mental health problems. But he also had a long history of association with the far-right. At least three witnesses claim that when allegedly carrying out this heinous crime, Mair shouted “Britain First!” (that could have been a reference to the far right organisation) or “Put Britain first”. Either way, his cause was that of nationalism; his alleged deed that of hate. Fuelling that hatred is the far right, but also the media and even certain political parties – all of which have been bombarding the British public over the last two years with lies and disinformation about refugees and in the lead up to the EU Referendum this campaign of hatred targetted against the ‘other’ reached fever pitch. Below, is the evidence of Mair’s far-right affilations and interests.

UPDATE 1: According to records obtained by the Southern Poverty Law Center, Mair was a dedicated supporter of the National Alliance (NA), the once premier neo-Nazi organization in the United States, for some decades. Mair purchased a manual from the NA in 1999 that included instructions on how to build a pistol (the pistol used to kill Cox?). Mair sent just over $620 to the NA, according to invoices for goods purchased from National Vanguard Books, the NA’s printing imprint. Mair purchased subscriptions for periodicals published by the imprint and he bought works that instructed readers on the “Chemistry of Powder & Explosives,” “Incendiaries,” and a work called “Improvised Munitions Handbook.” Under “Section III, No. 9” (page 125) of that handbook, there are detailed instructions for constructing a “Pipe Pistol For .38 Caliber Ammunition” from components that can be purchased from nearly any hardware store. Notice, too, that Mair purched a copy of a handbook on Nazism by Hitler. For more on this, see Appendix at end of this article that shows receipts of purchases by Mair.

The death of Jo Cox & how it happened should & must be a wake up call. Nationalism is an epidemic of apathy.

Perhaps the best tribute to Cox, to honour her legacy, would be for all political parties to agree, as per a suggestion by Peter Jukes, that 2000 refugee children from Syria immediately be brought to the UK to live in peace.

Let’s honour Jo Cox and her political legacy, and allow in 2000 Syrian children in respect of her long political struggle for them

The media also share the guilt in Mair’s alleged crime – in particular the right-wing, jingoistic and xenophobic, refugee-hating press (The Sun, Daily Mail, etc). And the Leave campaign played its part too in fueling such hate.

Add this all together and it amounts to nothing less than a toxic mix that provided the backdrop to what may well be the political assassination of a woman who simply cared about others.

B. Cox’s compassion for refugees

Jo Cox was involved with numerous organisations trying to help refugees. She also backed the recent amendment by Alf Dubs (who himself was a refugee child, brought to Britain prior to WW2 by Nicholas Winton’s Kindertransport) for the UK to accept 3,000 child refugees. She said:

We all know that the vast majority of the terrified, friendless and profoundly vulnerable child refugees scattered across Europe tonight came from Syria. We also know that, as that conflict enters its sixth barbaric year, desperate Syrian families are being forced to make an impossible decision: stay and face starvation, rape, persecution and death, or make a perilous journey to find sanctuary elsewhere. Who can blame desperate parents for wanting to escape the horror that their families are experiencing? Children are being killed on their way to school, children as young as seven are being forcefully recruited to the frontline and one in three children have grown up knowing nothing but fear and war. Those children have been exposed to things no child should ever witness, and I know I would risk life and limb to get my two precious babies out of that hellhole.

C. The evidence of Mair’s association with far-right

There is undeniable evidence that Mair was directly influenced by, if not was of, the far right. (Note: much of that quoted below was sourced by London Black Revolutionaries.) 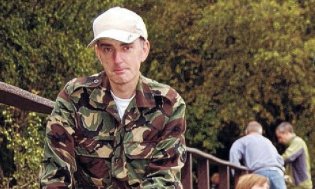 Tommy Mair had affiliations to an organisation called ‘SpringBok’ – their motto is ‘”Out of Europe and into the World” and is highly motivated against Labour’s “racism” towards white people. Basically it is a pro-white supremacist South African organisation in exile in Britain. See: http://www.springbk.org.uk/patriot.html & http://www.patrioticforum.co.uk/

Another newspaper guilty of hate crime

S.A. Patriot was the publication of a pro-white, global leadership and racial segregationists club. Mair’s name is confirmed in a bulletin uploaded to a blog (see image below).

According to an S.A. Patriot founder… “The [Springbok] Club is one of the most controversial organisations in the UK’s South African community. It’s a union of several different outfits, some long-gone, including the Empire Loyalist Club, the White Rhino Club and the Rhodesian Forum. The twenty people gathered here tonight (and there are more visitors than members) are highly opposed to the ANC, and long for the return of what they call “civilised rule” to South Africa.”

Further information shows that Springbok had a political split, resulting in the formation of the ‘Swinton Circle’. Swinton are anti-Europe, which appears to be their main campaign focus. For a list of their objectives, click here. Swinton are also actively involved in Pegida, attending demonstrations and meetings with other far-right organisations. See http://www.springbk.org.uk/lsc5.htm In February 2016 the Swinton Circle was contacted by Pegida UK and asked to support their “Silent Walk” in Birmingham in protest against increasing Islamisation throughout Europe. A number of Swinton Circle supporters took part in this event as a result of this request. In November 2015, Swinton Circle members gave their support to a special event organized by the Springbok Club in order to celebrate the 50th anniversary of Rhodesian UDI.

Note that S.A. Patriot backed Clive Derby-Lewis, who “served a life sentence for his role in the assassination of South African Communist Party leader Chris Hani. He has been described as a “right-wing extremist” by the Daily Telegraph; and as someone who “even by South African standards…has acquired over the years a reputation as a rabid racist”. 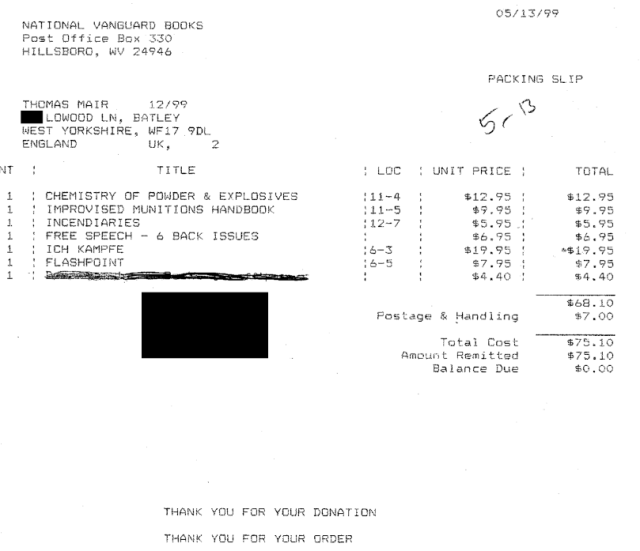 This entry was posted in Government, no category, Refugees and tagged Britain First, Jo Cox. Bookmark the permalink.