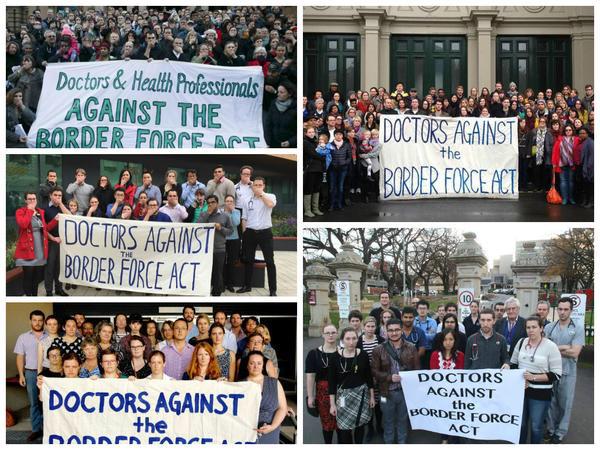 When the nation’s doctors oppose you, the Government really is in trouble

The International Criminal Court has updated its investigation into the Australian Government’s notorious asylum-seekers policies and practices. Much of the work involved in providing evidence to the ICC on this case is due to a very courageous and determined migration agent, Tracie Aylmer. Her efforts in establishing this case and the current state of play is outlined below. While cynics may say that it’s rare for the ICC to take forward a prosecution, let alone succeed in one, others might counter that an ICC investigation has huge symbolic value, for it puts on record details of abuses and allegations of crimes, as well as evidence received, for a global audience to see. In the meantime, the recent gagging order by an Australian Government that prefers censorship to truth has angered the nation’s doctors and, rather than deterring whistleblowers, has succeeded in encouraging more and more leaks as each day passes. In short, whatever the outcome of an ICC investigation the Abbott Government now has to face up to the reality that its treatment of asylum-seekers is seen by the world for what it is – a crime against humanity.

My Journey in relation to the ICC, by Tracie Aylmer:

In February 2014, Reza Berati was murdered at the Manus Island detention centre during a riot. This event began the start of my long journey to bring justice to the victims of abuse perpetrators in Australia and within the offshore detention centres. I was horrified that such a murder could happen. I was even more horrified that the government wanted not just to cover up the circumstances surrounding Mr Berati’s murder, but also that they wanted to blame him – not the murderer – for what had happened. To me, this was outrageous and exposed the intentions of a government not just in relation to its treatment of asylum seekers, but to the Australian public as a whole.

Being a migration agent, I was obliged to access to the Immigration Department manuals and guidelines in order to properly carry out my job. When Tim Jones, one of the organisers of a march in March 2014, asked me if there was a way in which the ICC could get involved in what had been happening, I conducted a preliminary check of those manuals and guidelines to see if there was any direct link between the ministers of Parliament and the murder. As a result of those reporting requirements, I found there was.

My understanding of the ICC goes back some years, to the time when I studied my Masters law degree (Juris Doctor). Most of my electives veered towards either human rights or the ICC. I had immersed myself in these specialisms and found my passion unwavering. While I tried to direct my attention to other fields, I tended to go back to the ICC, finding its functions both relevant and legitimate.

So when I was asked whether there was a direct link between the current government and breaches of Article 7 of the Rome Convention for the ICC, I found I could say ‘yes’ – there were indeed breaches.

Tim Jones then set up a secret Facebook group with several trusted people, in order to support me in my inquiries. They are still a great support.

It took two weeks for me to write the submission to the ICC. I knew what they needed and prepared myself to respond to all their requirements. The submission took up 45 pages. But I knew the ICC would also want to see evidence, so I included 73 attachments to back up the submission, including the manuals and guidelines used by the Immigration Department. I knew that the usual requests made by the ICC prosecutor – Madame Fatou Bensouda – prior to any investigation would of themselves be insufficient and that evidence would be needed too, so I complied with this requirement too at an early stage.

On 16 May, 2014, at around 5pm, I sent off the submission and attachments to the ICC. It took me several hours, as the attachments were extensive and the ICC inbox only took 5 meg of data each posting. It was incredibly time consuming!

On 19 May, 2014, the ICC sent me confirmation that they had received all the documents. Tim Jones then helped to publicise this. Initially, I asked that my identity not be revealed: I knew the extent of what I had done and wanted to keep a low profile. Tim Jones managed to keep me from public view for a while, until we both realised that more and more people wanted to know about me.

In August 2014, after being pressured to ‘come out’ as the person who had written the initial submission to the ICC, I spoke with Thomas Drake, the NSA whistleblower, to seek advice. He told me that the best and only way for me to become protected was to make myself as public as possible. So I agreed with Tim to speak to some of the media. Wayne Jansen from Nofibs was particularly interested and he passed on a copy of the submission to others, who liked it.

The reason for me to go public – to be protected – was hijacked to some extent. Others thought that someone else had written the submission. There were several times when I had to correct people about this.

In September 2014, the ICC wrote to me, explaining that they had no jurisdiction regarding the submission and advised that I should seek a domestic (Australian) solution first. They also advised that all of my information would be archived in case they received more information that could change their opinion. Of course, I was incredibly frustrated by this decision as I knew that we couldn’t seek a domestic solution as George Brandis would refuse outright to consider prosecution. I contacted Nofibs about this and they published an article about the ICC decision.

In October 2014, I learnt that Andrew Wilkie MP had submitted a letter to the ICC requesting that they examine what had been happening in Australia. I also discovered that Mr Wilkie’s office had seen the Nofibs article and so had decided to try to reverse the ICC decision. I then found out that several other people had written submissions to the ICC in the hope that an investigation would proceed.

By then the Government had begun – with glee – putting into place draconian legislation not just against the fate of the asylum seekers, but also against the liberties of Australians. The migration character and TPV laws were just two that were incredibly disappointing for the direction that Australia was heading. Laws were changed in order that the High Court challenge for the 157 Tamil asylum seekers could be decided upon in the Government’s favour. On 28 January 2015, the High Court indeed decided in this way.

Since September 2014, I kept the ICC aware of all relevant events in Australia. I can’t remember how many emails I sent to the ICC, explaining the situation and begging them to reconsider their earlier decision. And so on 30 January, 2015, it came as a complete surprise to find that they had decided to look further into the situation in Australia. In the letter they sent me they stated  that they would be as prompt as possible in their investigations but that they could still take some time. They also noted receipt of all of my emails, as well as further information from other sources.

At that point I asked several lawyers to compile all of the evidence and to send that to the ICC. I told the lawyers that even though the ICC already had much information, they would want more. I also said that it would not matter who sent what, as this information would eventually be called the ‘Australia situation’. All agreed to comply with this request.

Since then the situation in Australia re asylum-seekers has got progressively worse. The laws have become more draconian. Reports commissioned have shown the extent of abuse occurring within the detention centres. I discovered that Andrew Wilkie’s office had sent a copy of the Moss review to the ICC – a report commissioned by the Government. This was a relief, as I hadn’t. I then sent more information to the ICC.

The Border Force Act was then approved in Parliament in May 2015. As a result we were given a deadline as the amended Act criminalised anyone working within detention centres should they speak out. Everyone knows that any complaints made about the conditions in these centres go nowhere, so the only hope of change that anyone has is if we go outside the system. This means that anyone who speaks out is criminalised.

Australians then found out that the Australian Government had organised bribes to be paid to ‘people smugglers’ so that asylum seekers could be turned back to Indonesia in early June 2015.

The deadline for the Border Force Act was 1 July, 2015. The week before I called the ICC constantly, hoping to speak to someone. No one within the department was there to speak to me, although the receptionists were very friendly. Then, on 30 June, 2015, I was able to speak to one of the staff within the department that was looking at the Australia situation. I told him my many concerns. He listened, then told me he would tell the prosecutor exactly how crucial the situation had become. We talked about policing for arrest warrants, and he told me to keep sending information to the ICC, this time using my reference number. He also said that the final decision was up to the prosecutor and that she was still analysing the situation. He was very understanding about what was happening in Australia.

On 7 July, 2015, the prosecutor’s office within the ICC published a draft report on what they had investigated so far. This report recommended commencing investigations into a new situation, but didn’t provide any more details on which situation it was. It also stated that the ICC would now focus on the alleged abuse of children and would focus their attention on crimes committed outside of a perpetrating country.

Now, we have to wait. To me, it doesn’t appear we will have to wait much longer until the prosecutor makes her final decision in relation to the situation of Australia.