YPG Press Office report… Today, in Kobane, at least 50 people were killed by D’aesh (ISIS) terrorists, who attacked with three suicide car bombs – one from the Turkish border at Kobane’s Mursitpinar border gate. Kobane hospital is currently unable to treat the injured all at once. Those with critical condition are to be moved to North Kurdistan, Turkey. But Turkish military on the borderline are preventing the process of transferring the injured, most of whom are women and children. Despite learning how serious the situation of the wounded are, the Turkish military and their border officials are not responding and continue to keep the civilians waiting near the border crossing. More updates below…

See also: Isil attack on Kobane is ‘second biggest massacre’ of civilians by the group in Syria

UPDATE: Saturday, 36 hours after ISIS massacres of Kobani local Kurdish forces report that city is now secure and ISIS largely disarmed. Kurdish YPG/J are now less than 30 miles away from taking the ISIS stronghold of Raqqa. 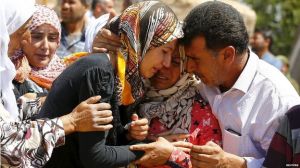 Previous reports: ‘Women and children slaughtered… “According to medical sources and Kobane residents  at least 120 civilians were executed by ISIS in their homes or killed by the group’s rockets or snipers,” said Rami Abdel Rahman, who heads the UK-based Syrian Observatory. He said women and children were among the bodies found inside houses and on the streets of the town, which is close to the border with Turkey.

Message from YPG: “The onslaught began at 4 am this morning when ISIS terrorists  crossed the border with the help of Turkish police. Reports confirmed 7 dead and 50 injured at that time. Our people need urgent help. All Kurds in Northern Kurdistan from Pirsus city (Suruç), please go to hospital. People in urgent need of blood ASAP!!!!! Please note, all civilian people from Kobanê, please remain calm and don’t leave your homes!!!! In the centre of Kobanê so far ten people have died. In Berxbatan village there is heavy fighting between YPG fighters and terrorists of ISIS. It is difficult to know how many civilians have been killed in Berxbatan village 23 are reported dead so far. Nobody from YPG was able to connect to the internet today because the Turkish telefon company “Tukcell” has been crippled…” 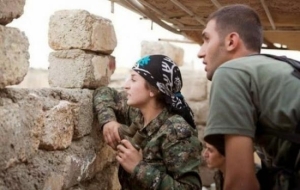 A group of D’aesh (ISIS) terrorists who waged an attack on Kobane city this morning were repulsed by our forces of the People’s/Women’s Defense Units in an appropriate reaction to their quick and simultaneous assaults. During intense fighting near the city’s border gate, at least 15 attackers have been confirmed killed, while a member of the terrorists has been captured alive.

For now, clashes continue within an extent where the terrorists encounter a total blockade by the Defense Units.

In the morning hours of June 25, in the north and south of the city of Kobane, attackers affiliated to the D’aesh (ISIS) terrorists carried out two simultaneous assaults, leading to large numbers of civilian casualties near the site. At 4:40 am, Kobane time, terrorist groups proceeded to explode a VBIED at the Mursitpinar border crossing with Turkey. It was after the suicide attack that the terrorists chose Kaniya Kurda neighborhood, Doctors without Borders’ centre, the Botan Neighborhood and Reshad Mosque in order to perform their desired attacks. It was a clear attempt to complete a massacre. The attackers, who were disguised as the Free Syrian Army fighters, started shooting and turned their heavy fire on the civilians in the area, most of them women and children.

But our forces quickly reached to the hot zones and prepared to return the terrorists’ fire. Severe clashes between the Defense Units and the D’aesh terrorists erupted within the mentioned locations. Our troops on all localities managed to surround the attackers and killed their core forces. While the fighting was taking place the terrorists launched another car-bomb attack on the Mursitpinar crossing. Our forces continue their operations against the besieged attackers in northern Kobane.

At the same time in southern Kobanê, in a concurrent attempt, the D’aesh terrorists tried to lead another attack at 5:30 am against the villages of Berxbatan, Zerik and the hill Sevê. Our combatants similarly repulsed the attackers to repel their forces.

According to what has been confirmed, for the cited locations 30 D’aesh fighters were killed. Detailed information will be shared with the press once our forces complete their task process.

Additional report from Cizire, Rojava… Following a major military campaign on the 50th uninterrupted day, the combined forces of the People’s/Women’s Defense Units (YPG/YPJ), alongside fighters from the Burkan al-Firat (Euphrates Volcano – FSA) Joint Operations Room from both Kobanê and Cizîrê (Jazira) Cantons, continue to maintain and advance against D’aesh terrorist groups around the small town of Ain Issa, Rojava, Syria. Furthermore, on the road linking Ain Issa to Raqqa, an assault operation was conducted by our combined forces, which resulted in the full liberation of two villages near the Belikh Water from the terrorists. In that region six of the enemy’s corpses were discovered in addition to a weapons and ammunition cache.