Peoples assemblies have been a dominant feature of anti-capitalism in Spain and Greece (see Part 2, coming soon) for years. In both countries this movement has paved the way for the success of Podemos and Syriza, respectively (though some may argue that they, particularly the former, exploited the assemblies and Indignados for their own electoral ends). In the UK there has been no exact equivalent; instead, historically, activism there has largely been based on issues, sometimes community centres and, of course, via militant unionism. It is useful to examine how the assemblies movement in both Spain and Greece has evolved and the lessons learnt from successes and failures. They have the potential to return some degree of democracy to the people; they are also an important component of the wider anti-austerity movement. In Part 1 we get a glimpse of what has been happening in Spain…

(Note: this article is adapted – and updated – from http://rabble.ca/… via The Free Online)

“The assembly is a central part of the Spanish left tradition. Social movements have always seen themselves through the prism of assemblies. We don’t mean controlled school assemblies, much less those of religious sects who use the form just for a semblance of participation without the danger of maybe taking a vote. We mean real assemblies… to sit around in a circle with no fixed agenda and no attempt to control, talking things out until decisions can normally be reached by consensus…”

The Spanish 15M movement evolved from occupying squares to hundreds of local assemblies, which in turn set off thousands of community initiatives. The beauty of a real assembly is that no one can take power, and any predatory parties, unions and egoistic self-seeking ‘leaders’ get sidelined, allowing revolutionary energy to flow.

The downside is that such movements can just vanish, when people get bored coming to assemblies, leaving specific commissions to evolve into new forms. For a more permanent organization a little more structure, i.e. instantly re-callable delegates –  prevents authoritarians and party hacks from usurping the assembly for a personal power base.  In Spain the local assemblies often  stopped meeting, but spawned activists who joined the great ‘Tidal Waves’  (mareas)..:

The PAH housing and anti eviction movement, which is a network of local groups, taking over property previously held by banks for mortgage arrears and so providing housing for thousands of homeless. 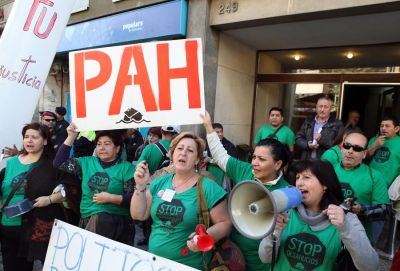 Then there are the feminists who succeeded in forcing the far-right Government to abandon the new Anti Abortion laws.

Then we saw the huge yellow ‘tidal wave’ of yellow T-shirts, uniting students and teachers  in a series of strikes.

Then there was the white T-shirt wave of health workers, whose occupations and endless demonstrations have prevented the selling off of some public hospitals,… etc.

All of these movements, as well as the large and diverse squat centre movement,  are using the assembly system, now refined with the use of ‘facilitators’, to try and guarantee real democracy.

It’s the oldest democratic form, and not just in ancient Athens. New England town halls were what most impressed French historian Alexis de Tocqueville when he studied early U.S. democracy. Vladimir Lenin, the leader of the 1917 Russian Revolution, said its essence wasn’t communism but “soviets” — popular assemblies that emerged during the revolution, yet can be found nowhere in the canonical writings of Marxism. (But Lenin eventually crushed them, brutally, in order to preserve the power of his party.) The poet Percy Shelley said, in the disappointment that followed the French Revolution and the rise of reactionary politics: “Let a vast assembly be /And with great solemnity/ Declare with measured words that ye /Are, as God has made ye, free”.

What’s the essential difference between elections and assemblies? The latter is all about  joint discussion and deliberation, while in an election each individual makes a private choice between pre-set alternatives. At an assembly, however, options get discussed and new ones arise; no one is left on their own and all benefit from the insights of others. The views of those better informed or more thoughtful have a chance to sway those who are less so. Of course it can all collapse into egomania and chaos – but that’s democracy; it’s worth the risk!

At the Occupy movement in London, outside St. Paul’s Cathedral, an older, middle-class woman looking at the grungy tents, asked: What are they accomplishing? But if there’d been an assembly in her own neighbourhood, she might have gone and felt less perplexed; “they” might even have asked her what she’d like to accomplish.

The 15M gave birth  to  one more movement – Podemos (we can do it) – which is an attempt to replace the corrupt, authoritarian elite with open participatory politics. Podemos has massive support, though it took advantage of the open local assemblies to launch itself as a political party.

Right now hundreds of local assemblies or circles are working flat out in the biggest ‘tidal wave’ yet, with the aim of washing away the corrupt political system. The established parties created a campaign of lies and defamation against Podemos in their controlled media, so it’s hard to know what is true. But the dangerous cesspit of Spanish politics is a graveyard for well-meaning movements of democratic renewal. You get absorbed by what you’re trying to transform. The ‘central committee’ of Podemos has now  ignored the web of assembly circles and sold out many basic principles even before the elections.

In summary, the open assembly system in Spain remains an essential part of any revolutionary movement and a stepping stone, whereby masses of people can take part and become politicized.