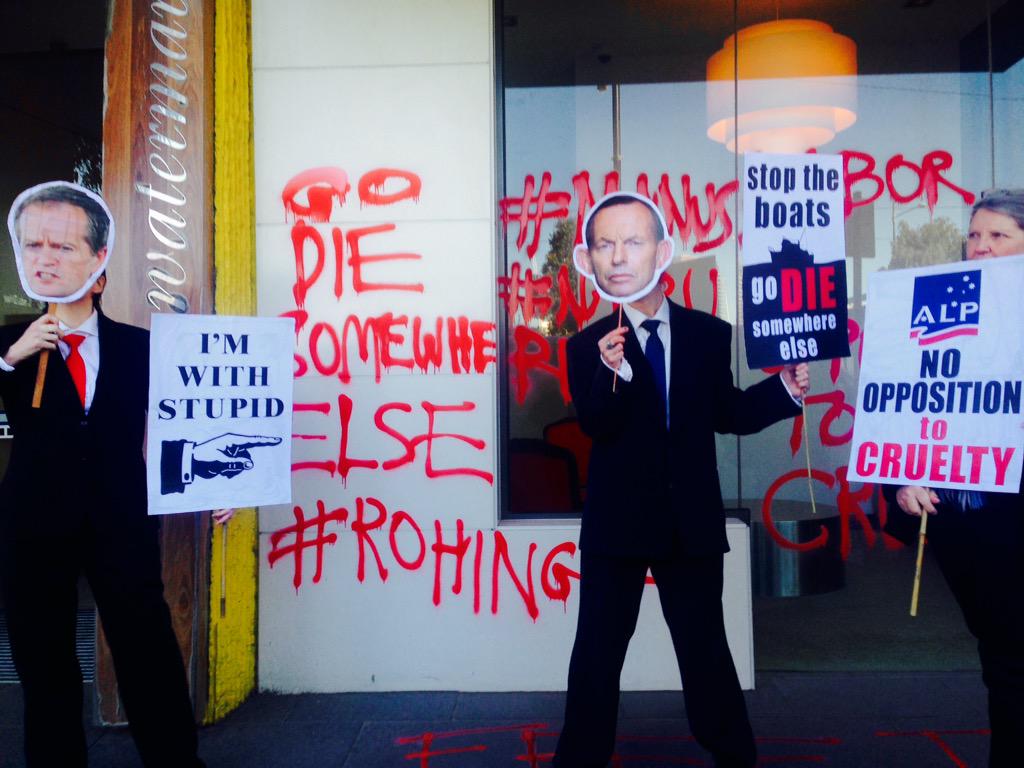 Yesterday we published an article arguing that a new Australian law, which criminalises the reporting of health and other abuse of refugees in detention centres, leaves whistleblowers with little option but to leak information anonymously via encrypted facilities. Today, evidence of that abuse was indeed made available – by Guardian journalist Paul Farrell via Scribd. That evidence was in the form of damning testimony, submitted to an ongoing Australian Senate inquiry by a key social worker, who had witnessed sexual and physical abuse of children at the Nauru refugee detention centre and who had tried to stop that abuse. The testimony not only implicated field managers and government officials but also Government ministers. It further made clear that a cover-up of this abuse by the Australian Government had been going on for more than a year and a half. This evidence is examined below.

For years, successive Australian governments have seen off criticisms of their notorious policies on the detention of refugees and asylum-seekers on offshore facilities. Now unquestionable evidence has emerged of widespread child sex abuse at the Nauru detention centre. Moreover, that same evidence shows that the Abbott-led Government of Australia has known about this abuse for the last 18 months, has done nothing about it and has tried to suppress it. Here is what has been revealed…

Viktoria Vibhakar was a former senior child protection officer with Save the Children Australia (SCA). She was one of ten Save the Children Australia officers who were deported from Nauru on instructions by the then Australian Federal Minister for Immigration and Border Protection, Scott Morrison. Ms. Vibhakar is a dedicated and qualified social worker and has worked in child protection for 20 years. The current Senate Inquiry follows on from the Moss review into the allegations raised by Ms. Vibhakar (and which concluded that Ms. Vibhakar and her colleagues had acted properly and should not have been deported).

The evidence provided by Ms. Vibhakar includes 32 specific cases of sexual and physical abuse at the Nauru detention centre. Here are just three of those cases…

Case no. 3: An adolescent male, “Danny” was sexually assaulted and then verbally mocked by a Commonwealth contractor on 16 November 2013… There was an attempted physical assault on the child’s brother by another Commonwealth contractor later that week… Danny was also subjected to another incident of assault by another Commonwealth contracted employee. The Australian Government – and Wilson Security – were subsequentl informed of what happened by SCA and were told that the local (Nauru) police would not be contacted. Emails proved that the DIBP (Department of Immigration & Border Protection) was informed a year prior to when the government claimed they first became aware of this and other allegations of sexual and physical abuse at the Nauru centre.

Case no. 4: A four year old girl showed signs that she had been sexually assaulted. A report was duly submitted by an SCA officer stating the girl was of high risk. The DIBP decided she should remain in the detention centre.

Case no. 5: “Mia”, an eight year old girl, alleged she had been sexually abused and according to her carer had tried to commit suicide. Details were reported to DIBP. However she remained at the detention facility for a further 7 months.

2. The consequences of the revelations

Ms. Vibhakar has stated to the Senate Inquiry that details of the abuse had been provided to the Australian Government as long back as November 2013. No action was taken by the Government. Nor did the Government pass on the information about the abuse but, instead, sat on it.

This is a scandal par excellence, of which no one can be absolved and is indicative of a moral vacuity in the Abbott-led Government. Individuals at the detention centre, as well as Transfield (the company that runs the centre), Wilson Security (which organises security at the centre), Australian Government officials, including the current and previous ministers who were/are responsible for immigration: all are complicit to different degrees in the abuse and should be held accountable. And it would be inconceivable that prime minister Abbott was not aware of the abuse reports held by two of his most senior ministers.

Action against all these individuals and Transfield and Wilson Security should not be put off until the Senate Inquiry is complete. Resignations are required now and prosecutions and charges should be laid, as appropriate.

Meanwhile, the Australian public, largely quiescent on these matters, should re-evaluate its own complicity. No longer can it say, as did the German public, post-World War Two, regarding concentration camps, that ‘we didn’t know what was happening’. In today’s internet age, ignorance is no longer an excuse.

Thus, Australians need to rediscover their moral backbone and demand that not only this abuse stop, but that the detention centres be closed down and a more humane process of meeting the needs of refugees and asylum-seekers be found and implemented.

Recently the Australian Government forced through the Border Force Act, a new law (which comes into effect in July) that makes it a criminal offence for anyone who reports on such abuse or related concerns. The law has been widely condemned, with one of the main critics being the AMA (Australian Medical Association). Similarly, Australia’s leading human rights lawyer, Julian Burnside QC, has lambasted it as well as the Government’s cruel refugee policy.

This entry was posted in Refugees and tagged Australia, Child sex abuse, Nauru. Bookmark the permalink.