Yesterday the Daily Mail published an article about Brits on holiday on the Greek island of Kos, who bemoaned the number of poor and refugees there and how they are annoyed to witness such dire poverty after forking out money to pay for their annual holiday. Two versions by Daily Mail staff of the offending article can be found below (the first was considered too provocative). The article contrasts sharply with the generosity of the Greek people who, despite their country facing bankruptcy and coping with 40% unemployment and unheard of austerity measures, have shown the world their kind-heartedness in how they have helped feed and clothe and care for the refugees arriving on their shores. Similarly, the heroic efforts of MOAS and MSF in their daily rescue missions, which have seen over 4000 lives saved by these two organisations alone. Over the last two weeks Britain’s HMS Bulwark saved 1500 lives (800 in the last 24 hours) and a total of 8000 lives have been saved over the last 48 hours by the combined efforts of navies and NGOs. Below, we examine the Daily Mail article, pose a satirical response, then finish up with some hard realities…

The Daily Mail article featured photos of Brits looking suitably disgusted at the sight of the refugees (see main photo and one below).

Over 200 refugees sleeping in the courtyarrd of Kos police station

‘Disgusted’ Anne and Tony Servante from Manchester (see photo below) told the Mail: ‘We have been coming here for almost ten years. We like to eat, drink and relax. But this time the atmosphere has changed. It’s really dirty and messy here now. And it’s awkward. I’m not going to sit in a restaurant with people watching you.’

A British couple on holiday with their grandchildren from Birmingham said: ‘We have never been before but we don’t like it. We won’t be coming back if it’s like a refugee camp again next year.’

Of course, the ‘refugee experience’ could be re-packaged especially for the Brits. Perhaps the Daily Mail might consider funding such a package with the following features…

Welcome to the Mediterranean Refugee Experience!

Forget the satire, here’s the reality…

Most of the refugees arriving at Kos are from Syria, escaping ISIS or the Assad regime (which recently used chemical weapons against civilians in opposition-held territory).

According to Human Rights Watch… “All of Syria’s neighbors have either closed their borders or imposed limits on the numbers of refugees that can enter their countries, exposing refugees to violence but leaving them with nowhere to flee. In Jordan, despite denials by government officials, UNHCR, the UN refugee agency, announced in October that the government had closed the border to refugees, stranding thousands of Syrians in remote desert border areas with limited access to humanitarian assistance. The Jordanian government has also deported Syrians and Palestinians from Syria back to the country despite the serious risks. In Lebanon, where one in four residents today is now a refugee, refugees face increasing curfews, arbitrary arrests, and acts of violence by private citizens who operate with impunity; meanwhile, the government has announced that its border is now closed to all but the most emergent humanitarian individual asylum seekers.”

To see all the (interactive) UNHCR data on Syrian refugees, click here. 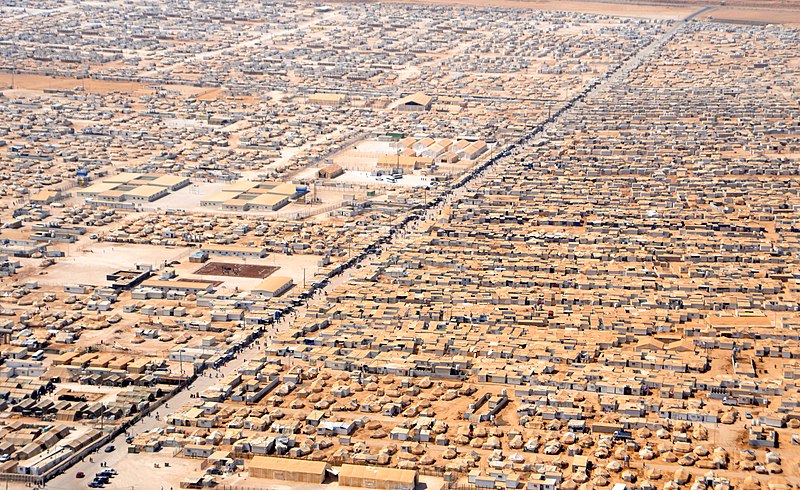 No, not a city but a Syrian refugee camp in Lebanon

This entry was posted in no category, Refugees, Satire and tagged Greece, Mediterranean, Syria. Bookmark the permalink.