Note: above letter continues below (at end of article).

With the lack of confidence in the protracted public and historical inquiries in Northern Ireland regarding the role of the British army in the ‘dirty war’, it is inevitable that victims are venting their frustrations by instigating civil prosecutions – the latest being against the Ministry of Defence and 89 year old Major-General (retired) Sir Frank Kitson, who, as the architect of ‘low-intensity operations’, was responsible for counter-insurgency ops in the province. But it doesn’t stop there: what is demanded are the names and details of all those who took part in this ‘dirty war’. A can of worms has been well and truly opened…

The British state is particularly expert when it comes to dealing with perceived injustices and has a ready-made formula: a) wait as long as possible, then initiate a public inquiry, b) ensure that the inquiry takes as long as possible; c) ensure whoever leads the inquiry is guaranteed to reach no useful conclusions. This is most certainly the case with the various inquiries that have taken place – or are still underway – in Northern Ireland.

Last week it was announced that a private prosecution will commence against the Ministry of Defence and Sir Frank Kitson, who was a senior military commander with the British Army and who saw active service in Northern Ireland as well as in the Malaya campaign. Kitson authored the oft-quoted manual, ‘Low-intensity operations‘, which was basically a ‘how to’ on dirty tricks, psyops (psychological operations) and military propaganda, etc.

The private prosecution against Kitson is being conducted by lawyers acting on behalf of Mary Heenan, the widow of Eugene Heenan. The case against Kitson alleges he played a pivotal role in the dirty war in the province; specifically, this led to a number of extra-judicial killings, including that of the husband of Mrs Heenan.

Legal papers were served on Kitson (and the Ministry of Defence) a week ago.

B. The killing of Eugene Heenan

Eugene Heenan was killed in February 1973 when the minibus carrying him and 14 other men to a building site in East Belfast was attacked by Loyalist paramilitaries. Mr Heenan, who had four children, was a foreman joiner who had been overseeing part of the construction of a Catholic school in east Belfast at the time of his murder. When the Army-issue hand grenade was thrown into the packed minibus, which had been deliberately slowed, he took the full force of the blast while trying to shield the other passengers.

A British army soldier, Albert Baker, was subsequently jailed for life for killing Heenan and three other men, but Baker later claimed to have had links to British intelligence. Baker was also a member of the outlawed Ulster Defence Association (UDA) and a leading member of the so-called “Romper Room” gang (a UDA unit).

Mrs Heenan is seeking damages from Kitson and the MoD, alleging that her husband died because Kitson and others had used agents knowing, or that they should have known, that they would take part in criminal actions. Mrs Heenan said: “Given that those agents were embedded with paramilitary groups and the nature of Northern Ireland at the time, it was reasonably foreseeable that activity could include murder. Frank Kitson was therefore negligent in creating the policy and the Ministry of Defence were negligent when allowing its implementation. The policy created the expectation that people working for the State would commit murder.”

Furthermore, Mrs Heenan is demanding to know a) the names of all those who served under the notorious Military Reconnaissance Force (aka Military Reaction Force), one of several British army and intelligence dirty tricks units that were in active during The Troubles, and b) the names of all those acting on behalf of the British state who infiltrated paramilitary organisations and who took part in, organised or encouraged killings.

The Military Reconnaissance Force (MRF) was SAS trained and including SAS personnel. It was a small but elite unit and numbered about 40 men who specialised in in covert action. They set up Loyalist and Republican ‘pseudo-gangs’ to infiltrate and subvert their enemies’ operations.  The pseudo-gangs were directed from the outside by the Army Intelligence. They retained a high degree of independence, but were always open to manipulation and infiltration. They owed much of their training, supply of intelligence and materials to the British Army, routed through the RUC and the Ulster Defence Regiment.

The MRF was eventually replaced by the Special Reconnaissance Unit, which had the task of putting terrorist suspects under covert surveillance as well as recruiting and running informers. As with the MRF, former SAS soldiers served with the SRU, which liaised closely with the RUC Special Branch. The SRU was later replaced by the FRU (Force Research Unit). 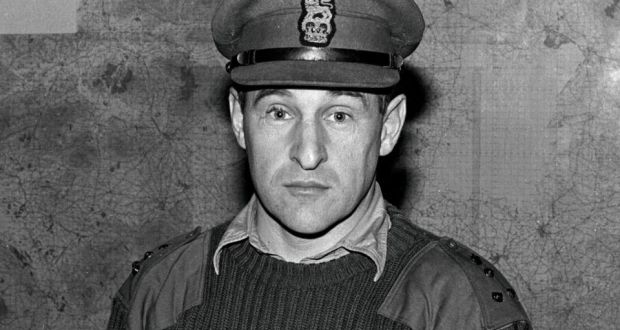 Solicitor Kevin Winters of KRW Law, who is acting for Mrs Heenan, said: “These are civil proceedings for damages, but their core value is to obtain truth and accountability for our clients as to the role of the British Army and of Frank Kitson in the counter-insurgency operation in the north of Ireland during the early part of the conflict as well as the use of loyalist paramilitary gangs to contain the republican-nationalist threat through terror, manipulation of the rule of law, infiltration and subversion – all core to the Kitson military doctrine endorsed by the British army and the British government at the time.”

The solicitors have stated that they expect many more similar claims to be lodged soon.

Kitson gave evidence to the Bloody Sunday Inquiry. After his tour of duty in N Ireland Kitson went on to become Commander-in-Chief, UK Land Forces.

PHASE I. Preparing to protest, …the enemy [a section of the country’s people] is likely to be occupied in spreading his cause… (p 71). Set agents to work now! In normal times, and in the very early stages of subversion, the intelligence organisation has got to be able to penetrate small…highly secure targets (p 72). It may have to invent new ways to do it. (At a Rand Corporation symposium in 1962 the author found a consensus: field officers prefer lots of low grade information to a small amount of higher quality.)

Next, the army should help with psyops (psychological operations– propaganda, PR). Psyops can offset the popular appeal of S&I’s cause and enhance the government’s story. Experts develop policy; technicians put the policy into films, programmes, articles, leaflets; machines spread the results by broadcast, print, and projection. At this early stage, the army may even counterorganize. It can build controls over the civil community and frustrate any efforts by S&I to do so. The method adds to psyops with good deeds. It sends out persons whose tasks are …doing work [to] help remove sources of grievances and at the same time making contact with the people. The…jobs… range from teaching to the setting up of clinics, advising on simple construction works, and working on agricultural projects (p 79).

PHASE II. Nonviolent disorder–mass meetings, marches, strikes– requires persuading multitudes to do something. This phase focuses on crowds, usually in cities. Kitson suggests a …judicious promise of concessions [to split the many from S&I leaders, while] imposing …calm by the use of government forces [then announcing] that most of the concessions can only be implemented once…life…returns to normal (p 87). Civilians must look upon troops with …respect and awe…. If an impression can be built that although [they] have used little force so far, they might at any moment use a great deal more, the people will be wary and…fewer men will be needed (p 90).

PHASE III. Open insurgency erupts. The army’s job is first to find armed groups and their supporters, then to smash them. It collects and studies background information, developing it to enable contact with the opponent. Kitson tells how to fish for information and to snuff out …very small groups…in large urban rabbit warrens… (p 127). An example of a simple Special Operation would be the cordonning of a [community] and the examination of occupants by…informers concealed in hoods… (p 100). Technology helps. Suppose a central computer kept watch lists–data on S&I throughout the country. If a remote interrogator could search them by wireless, he might …get the information he needs to break down a prisoner without delay (p 142).

This entry was posted in Intelligence and tagged FRU, Ireland, MRF, Northern Ireland. Bookmark the permalink.