‘Enemy within’ GCHQ monitoring declared unlawful; and their sister organisations? 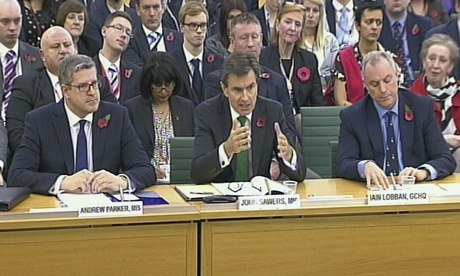 (The then) heads of MI5, MI6 and GCHQ heads at November 2013 Parliamentary committee meeting

Today, in a landmark decision, a tribunal declared that the mass snooping of citizens by GCHQ in conjunction with the NSA was unlawful. Previously we revealed how former heads of GCHQ had gone on to work for a specialist communications firm that supplied equipment to the Assad regime. Last week there were further revelations about how British-controlled territory Diego Garcia was used as a US interrogation centre and as a staging post for rendition flights; also, that MI5 admitted that its role in the rendition of Libyan opposition leaders to the Gaddafi regime may have assisted Al-Qaeda. All in all, these illegal activities and policy failures point to an intelligence and security community given free rein to run riot with our liberties: in short, they are our ‘enemy within’.

British intelligence services acted unlawfully in accessing millions of people’s personal communications collected by the NSA, the Investigatory Powers Tribunal ruled today. The Tribunal stated: “The regime governing the soliciting, receiving, storing and transmitting by UK authorities of private communications of individuals located in the UK, which have been obtained by US authorities … contravened Articles 8 or 10” of the European convention on human rights.”

The decision marks the first time that the Tribunal, the only UK court empowered to oversee GHCQ, MI5 and MI6, has ever ruled against the intelligence and security services in its 15 year history. The Tribunal declared that intelligence sharing between the United States and the United Kingdom was unlawful prior to December 2014, because the rules governing the UK’s access to the NSA’s PRISM and UPSTREAM programmes were secret. It was only due to revelations made during the course of this case, which relied almost entirely on documents disclosed by NSA whistleblower Edward Snowden, that the intelligence sharing relationship became subject to public scrutiny. The claimants in the case were Privacy International, Bytes for All, Liberty, and Amnesty International. PRISM and UPSTREAM, which have been in existence for nearly a decade, were made public in June 2013 by NSA whistleblower Edward Snowden. Through PRISM, the NSA has gained access to the data and content handled by some of the world’s largest Internet companies, including Microsoft, Yahoo, Google, Facebook, PalTalk, AOL, Skype, YouTube and Apple. With UPSTREAM, the NSA intercepts bulk data via fibre optic cables that carry the world’s communications. The scope of this surveillance is unprecedented.  For instance, the top five programmes within UPSTREAM created 160 billion interception records in one month. In one day, the NSA was able to collect 444,743 e-mail address books from Yahoo, 105,068 from Hotmail, 82,857 from Facebook, 33,697 from Gmail and 22,881 from unspecified other providers. Source: Privacy International (with additional hyperlinks from UndercoverInfo.)

Now consider this… If the ordinary person learnt there was a secretive organisation in Britain spying on the entire population and targeting journalists as well as lawyers, that person may be forgiven for thinking that that organisation could only be considered as ‘an enemy within’. And if that organisation managed to persuade internet companies to weaken their encryption facilities, so making everyone vulnerable to hacking or fraud, there would naturally be alarm. The organisation is, of course, GCHQ (acting in collusion with MI5, MI6 and special police units) – whose activities could be characterised as subversive, and a threat to the very well-being of us all.

{Note: Two years ago it was revealed that Finmeccanica, a security and military communications company, whose UK operations were led by former head of GCQH Sir Kevin Tebbit, had supplied equipment to the Assad regime.  Selex Elsag, a subsidiary of Finmeccanica, sold the communications equipment to Syria in May 2011 even though the EU had imposed an arms embargo on the regime. The equipment included Tetra, which was intended for the Syrian police and military. In February 2012 Selex Elsag engineers visited Syria to provide training. (Another Finmeccanica senior administrator – non-executive – and former director of the GCHQ was Sir David Omand.))

Last Wednesday the Interception of Communication Commissioner’s Office published a report that revealed how 19 police forces in Britain over a three year period made more than 600 applications to uncover 242 confidential sources and 82 journalists (mainly national newspapers). Most of these involved suspected leaks by public officials – i.e. whistleblowers. Of the 242 suspected sources, 126 worked for the police, 52 worked as prison officers or secure hospital staff, 38 were military staff, four worked for central or local government , and 22 were “unspecified/unknown”. The commissioner, Sir Anthony May, admitted that police forces “did not give due consideration to freedom of speech” and Home Office guidelines do not sufficiently protect journalistic sources. 43% of information sought was for traffic data, including telephone call records, resulting in the snooping of confidential sources. Under Ripa police can request data on phone numbers a ‘suspect’ has called and whom the suspect has emailed. The commissioner’s report stated that the police acted against Article 8 of the European Convention of Human Rights and did not give consideration to journalists’ rights to freedom of expression under article 10 of that convention.

It was also revealed that details of journalists and their sources who were spied on were entered into the Domestic Extremism Database. The National Domestic Extremism Database is a database of individuals associated with protests. It is managed by the National Public Order Intelligence Unit (NPOIU) within the National Domestic Extremism and Disorder Intelligence Unit (NDEDIU) but managed by the Metropolitan Police Service – specifically its Counter Terrorism Command and with links to the National Special Branch Information System (NSBIS – codebame Fairway). There are three related databases, as follows: CO11 Protester Database is run by the Metropolitan Police’s Public Order Unit (CO11) with much of the informtion provided by the Forward Intelligence Teams; the Commander’s Archive, which contains sensitive documentation not stored in Special Branch records; CrimInt contains information on criminals, suspects and protesters.

Police have also been criticised for monitoring talks and meetings at UK universities.

In May 2013 Umut Ertogal, the ‘head of open source intelligence with the UK Police National Domestic Extremism Unit’, revealed in a private report to the Australian police (then preparing for the Brisbane G20 Summit), that the unit used a software tool called SOCMINT to monitor social media sites to gauge public mood. It was apparently extensively used during the London 2012 Olympics and for ‘predicting hotspots during the 2010 student protests’ – including a call for a protest against a visit of Prime Minister David Cameron to King’s Cross railway station that resulted in the arrests of 10 people. It was also revealed that at the time, SOCMINT (which stands for ‘Social Media Intelligence’, a name given to this open source intelligence gathering technique) it was being run by a staff of 17 people working around the clock, scanning Twitter, YouTube, Facebook and other public forums used by UK citizens. Ertogral reportedly said that YouTube effectively acted as CCTV and Google Glasses were ‘another channel for us to explore and look at’.

Last week Ian Cobain revealed in the Guardian that a senior US official admitted that the US base on Diego Garcia was used as an interrogation centre, that the island was also a staging post for rendition and that it would stretch incredulity if the British had not been aware of what was going on. The evidence of Britain’s role in rendition is overwhelming: this includes details of numerous rendition flights via the UK and Diego Garcia.

Then there is the matter of the rendition of Sami al-Saadi and Abdul Hakim Belhaj and his family to the Gaddafi regime, where they were tortured: apparently MI5 now regrets its part in this debacle. Of course, this all happened at a time when the Blair Government was conducting a very dubious strategy of courting the Libyan leader in order to get his assurance that he would not manufacture weapons of mass destruction. This was pure theatre, for Gaddafi did not have the capacity to manufacture WMD. In truth, this rapprochement was all about – yes, you guessed it – oil. Blair miscalculated big time, for Gaddafi’s time was almost up and it was not long after that before he was deposed. Britain’s security and intelligence services, not for once, found themselves on the wrong side, if not wrong footed. Documents later found in Libya showed that Britain was directly involved in rendition and fully aware of the kind of torture and intense interrogation rendition victims faced in Libya.

British foreign policy is, of course, one of the underlying causes for these intelligence and security failures. To take one example – that of Britain’s policy on Syria… Two years ago Britain was poised to back the US in taking out Assad’s chemical warfare factories in the wake of several massacres, some involving whole villages, such as Ghouta. Instead, after Russian intervention, a deal was struck to allow chemical weapons specialists to destroy the stockpiles. However, there are reports that these weapons, in the form of chlorine gas, may still be being used.

In the early days of the civil war in Syria, Britain (and the USA) encouraged an insurgent opposition to Assad, the most favoured organisation being the Free Syrian Army. But this support for the FSA did not include arming them. And so another guerrilla organisation emerged, which used very different tactics and ascribed to very different ethics (or lack of them): in time it revealed itself as ISIS. The FSA was then left in a position where it had to counter both Assad and ISIS, with the only other effective ally it could count on being the Kurdish militias (given that the Iraqi army was in disarray). This all left Britain’s foreign policy in tatters in that Britain was, of course, vehemently opposed to ISIS and so now felt inclined to allow Assad free rein. Thus the civil war in Syria has escalated, hundreds of thousands of civilians have been slaughtered, millions made refugees, while Britain washes its hands and allows a mere 90 Syrian refugees into the UK.

Meanwhile those Europeans who have gone to the conflict zones to provide humanitarian aid to Syrian civilian refugees or to help the resistance against ISIS and Assad are being criminalised because European authorities are too lazy (or stupid) to be able to work out who are the ‘good guys’ and who the bad.

British foreign policy has clearly proved disastrous, highlighting in particular a chronic ignorance of politics in Arabic speaking countries (Mid-East and North Africa). This failure in foreign policy is compounded by what can only be described as an identity crisis within the intelligence community, which seems more and more intent on spying and instilling fear on the very population it purports to protect.

7 Responses to ‘Enemy within’ GCHQ monitoring declared unlawful; and their sister organisations?