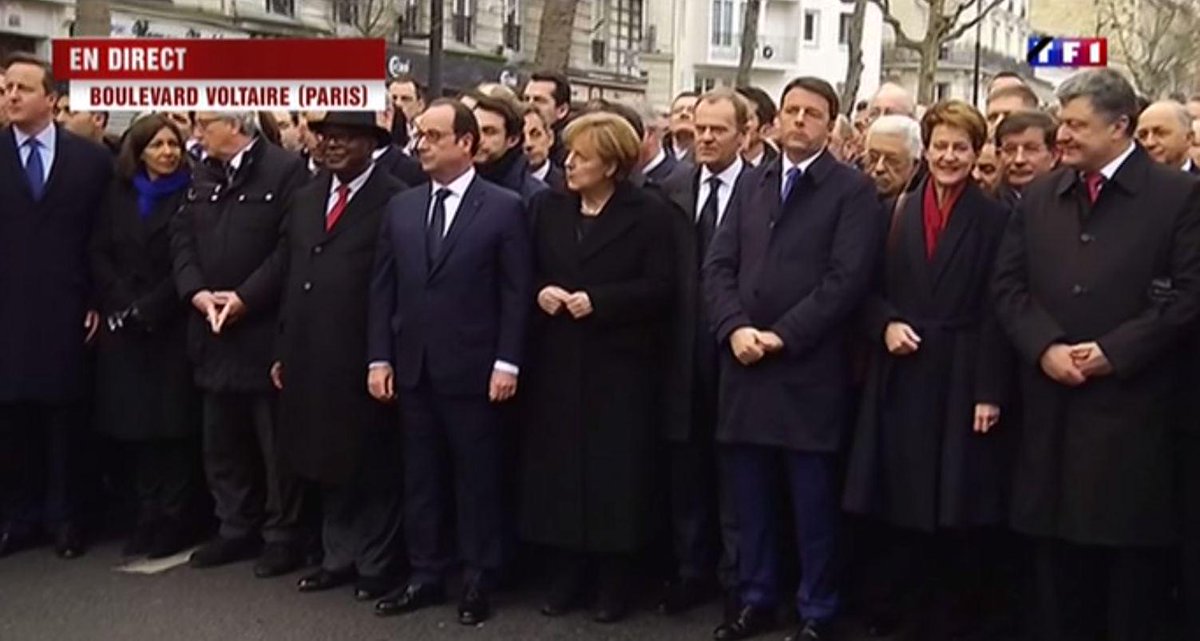 The hypocrites marching today in Paris

Charlie Hebdo is a product of French culture and a radical liberalism that stems directly from the 1830 French revolution and later the quasi-anarchist situationst movement of 1968. In France – where philosophers such as Diderot, Proudhon, Sarte, Vaniegem and Voltaire and other radicals are revered as much as poets and artists – anti-clerical and revolutionary views have always been a vital undercurrent of French thought. This contrasts sharply with the traditions and practices of many other Western countries. In Australia for example, anti-clerical sentiments are illegal (via the anti-vilification law) and consequently Charlie Hebdo would be banned there. In Britain, where it is still illegal to be blasphemous, the intelligence services regard any divergence from that of the established views as worthy of surveillance – indeed, it’s unlikely that a British version of Charlie Hebdo would be allowed and if it was its staff would be seen as subversion and their communications constantly monitored by GCHQ.

GCHQ is, of course, by no means confined to targeting terrorists (or paedophiles or criminals) or even political radicals, but the entire population of the UK and of populations in most parts of the world. GCHQ will nevertheless argue that increased surveillance is essential – last week Andrew Parker, who heads MI5, asked for a greater expansion of resources in the wake of the attacks in France. (Furthermore, the UK media, which, with the odd exception, panders to all such requests from the intelligence services, knowingly or otherwise promote a culture of fear.)

Or as Trevor Timm said in an article in the Guardian… “As politicians drape themselves in the flag of free speech and freedom of the press in response to the tragic murder of Charlie Hebdo cartoonists, they’ve also quickly moved to stifle the same rights they claim to love. Government officials on both sides of the Atlantic are now renewing their efforts to stop NSA reform as they support free speech-chilling surveillance laws that will affect millions of citizens that have never been accused of terrorism… Across the Atlantic in the US, literally within moments of when the Charlie Hebdo attack first became public, conservative members of Congress jumped at the chance for political exploitation… Former NSA director (and prolific liar) Michael Hayden went on national television to argue the NSA collecting the phone records of every single American “doesn’t look so scary now”, despite the reality that its decade-old mass surveillance program that violates the privacy of hundreds of millions of people every day has never having stopped a terrorist attack.”

Of course, GCHQ’s French equivalent knew everything that could be known about the terrorists who carried out the killings, but these intelligence experts failed to act.  Cherif Kouache who, with his brother Said, was responsible for the murder of staff (and a visitor and a janitor as well as two police officers), had a previous conviction for terrorism and spent time in prison. Said visited Yemen, where he met up with al-Qaida operative Anwar al-Awlaki. Amedy Coulibaly, who took several persons hostage in the supermarket and killed four of them, had served five years imprisonment for assisting in the escape from prison of Ait Ali Belkacem, who was a member of an Algerian-based group and had been sentenced to life imprisonment for an attack in Orsay that saw eight people killed. The Kouache brothers were also on a US no-fly list (barring them from flying to or through the USA).

Ironically, the degree of mass surveillance that GCHQ advocates would have been condemned by the staff of Charlie Hebdo, for Charlie’s mission is not merely against the ignorance of religions per se but is anti-establishment at a level that makes the British magazine Private Eye appear conservative. One of Charlie’s staff was Wolinski, who was a founder of the proto-anarchist paper, Enrage; another staffer, Charb, was a sponsor of the radical left Front de Gauche; another, Willem, describes himself as an anarchist; other contributors to Charlie included poets from the 1968 counter culture. Collectively, those who worked for or contributed to Charlie Hebdo were anarchist, subversive and above all, free thinkers. Charlie Hebdo condemned all religions as equating to ignorance, knowing that to absolve one absolves all.

Thus there is a large degree of hypocrisy by those Western leaders who offer their solidarity to the French people who mourn the loss of lives resulting from the recent terrorist actions That people like the prime ministers of Italy, the UK and Spain and other world leaders (but not Obama , who declared ‘Viva la France’ but not ‘Je suis Charlie’) are today honouring these people is the ultimate absurdity, for in their daily lives Charlie Hebdo staff reviled them. The marches in Paris today should have been led by the bearers of a flag that truly represent Charlie: black.

Of course, those who died at Charlie Hebdo were well aware that their lives were at risk, but heroically refused to back down in their criticism of religion and government. Perhaps that kind of non-military, philosophical heroism is infectious.. So, finally…

In the Jewish supermarket where one of the terrorists had taken several people hostage, Lassana Bathily, a shop assistant, helped six people – including a toddler and his father – to escape death by hiding them in a cold store that could be locked from inside. But rather than stay inside the cold store himself (presumably his absence from the main part of the shop might be noticed and trigger alarm) he returned to where the terrorist was still holding most of the hostages. In doing that he risked his own life and helped save the lives of six others. Bathily is a Muslim. His actions were that of anyone who cares about others, disregarding religious or any other differences. Deep down these differences are nothing, for it is our common humanity and our innate, ethical sense of right and wrong that transcend all religious and territorial sensibilities. Also, at the print works where the Kouache brothers had sought refuge, the manager, who had been taken hostage by the brothers, was concerned about a neck wound that Said Kouache had suffered and so helped dress it. In doing this he was allowed to leave the premises unharmed. All that day a young graphic designer had lain hidden in the premises, behind a sink, but risked his life by sending text messages to the police to advise them on the layout of the property.

This entry was posted in Resistance, Surveillance and tagged anarchism, Charlie Hebdo, GCHQ. Bookmark the permalink.